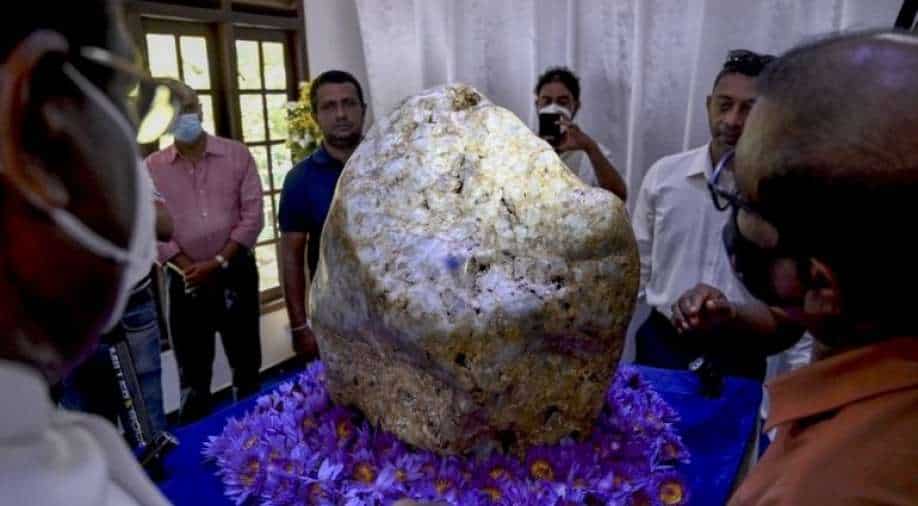 According to experts, the precious sapphire has an estimated value of over $100 million. However, it can take a year to clean the stone of mud and other impurities

A sapphire called the ''Queen of Asia,'' that weighs more than 300 kgs has been unveiled in Sri Lanka.

The world's largest natural corundum blue sapphire was discovered three months ago inside a gem pit located 45 kms away from Colombo.

Almost 90 percent of all corundum stones found in the world are from Sri Lanka famed for centuries for its unique gemstones.

"The person who was digging the well alerted us about some rare stones. Later we stumbled upon this huge specimen," said its owner Chamila Suranga.

Previously, there was a large star sapphire cluster found in Ratnapura weighing over 500 kilogrammes. Known as the gem capital of the South Asian country, Ratnapura is a leading exporter of sapphires and other precious gems.

According to experts, the precious sapphire has an estimated value of over $100 million. However, it can take a year to clean the stone of mud and other impurities.

A group of Buddhist monks chanted blessings for the gemstone before it was unveiled.

"I have never seen such a large specimen before. This was probably formed around 400 million years ago," said renowned gemmologist Gamini Zoysa.

Meanwhile, Thilak Weerasinghe, the Chairman of the National Gem and Jewellery Authority of Sri Lanka said "It is a special star sapphire specimen, probably the biggest in the world. Given the size and its value, we think it will interest private collectors or museums."

The country's local gems and jewellery industry body had reported that it had earned around half a billion dollars through the export of gems, diamonds, and other jewellery last year.