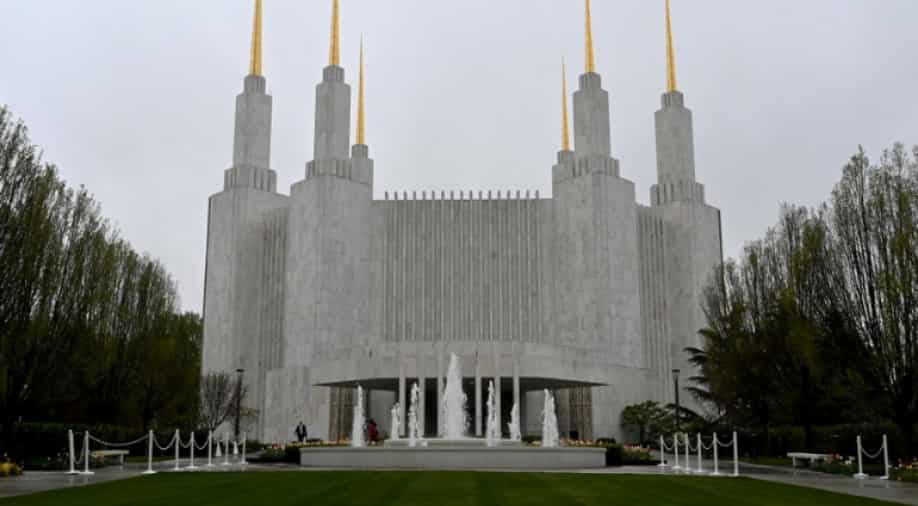 View of the temple of the Church of Jesus Christ of Latter-Day Saints with its six spires in Kensington, Maryland, near Washington, DC, April 18, 2022. Photograph:( AFP )

Currently, only members of the Church of Jesus Christ of Latter-day Saints are allowed to visit it

The Mormon Temple, which is one of the most mysterious buildings in the United States, is all set to open to the public after almost 50 years.

However, they will need to dress in white, from head to toe, and discard their street clothes before doing so.

Currently, only members of the Church of Jesus Christ of Latter-day Saints are allowed to visit it.

According to a senior official in the church, Kevin Duncan, "People feel like what we do inside is a secret, but as you saw today, it's just sacred. It's very sacred for us."

The intriguing temple, with six golden spires and pristine white walls rising above the surrounding trees, is located in Kensington, Maryland.

US media was allowed to visit the temple on an open day during which it captured the luxurious interior of the place that can has a massive crowd capacity of 750,000 people.

Before this, the last time somebody visited the temple was in 1974 by then-First Lady, Betty Ford.

One of the 12 apostles of the church, David Bednar told the news agency AFP, "It's a reset. A symbol of equality, purity."

Private tours for invited guests will continue from April 19 to April 27. The 160,000-square-foot structure had been closed in 2018 for renovation due to a plumbing issue but its reopening got delayed due to the lockdown in the coronavirus pandemic.

On the premises, there are 12 life-size bulls behind a pool that represent the 12 tribes of Israel. The temple has a ''sealing room'' for marriages and baptism by immersion for the dead.

“Brighter light we have and the knowledge we receive from the gospel as we learn and grow and ascend to be more like our Heavenly Father,” said Dan Holt, project manager for the Washington DC Temple renovation project.

Meanwhile, a local church leader in Washington, David Oryan said, “From the outside, everyone sees [the temple] on the [Capital] Beltway, and it’s bright at night and it’s beautiful. But it’s even more beautiful on the inside.”

“We invite everyone to come to the open house and feel the Spirit here,” he added.