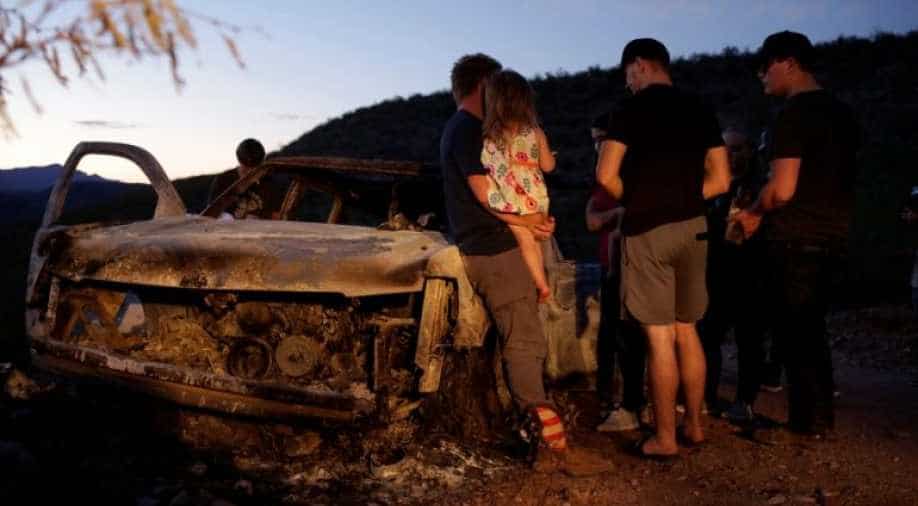 Relatives of slain members of Mexican-American families belonging to Mormon communities observe the burnt wreckage of a vehicle where some of their relatives died, in Bavispe, Sonora state, Mexico November 5, 2019. Photograph:( Reuters )

The three women and six children, who had dual US-Mexican citizenship, were killed on Monday as they drove on a road between the states of Sonora and Chihuahua, which border the US.

Mexico alleged Wednesday that a drug cartel called "La Linea" massacred nine Mormon women and children in a case of mistaken identity, but devastated relatives insisted their loved ones were deliberately targeted.

The three women and six children, who had dual US-Mexican citizenship, were killed in a hail of bullets Monday as they drove on a rural road between the states of Sonora and Chihuahua, which border the United States.

Eight other children managed to escape, six of them wounded. The case has caused a shock on both sides of the border and prompted US President Donald Trump to call for a "war" on Mexican cartels.

The head of the Mexican military's joint chiefs of staff, Homero Mendoza, said authorities now believe the massacre was perpetrated by La Linea (The Line), a drug cartel based in Chihuahua.

He said investigations indicated the group had sent a squadron to the lawless mountain region where the attack occurred to fend off potential incursions by a rival gang, Los Salazar, which is based in Sonora, after recent clashes between the two.

But relatives rejected a case of mistaken identity, saying they believe their family was deliberately targeted.

"I have to emphasize there was no duelling cartels and there was no crossfire that our family were caught up in. They were murdered -- massacred -- solely by one acting cartel from Chihuahua," family member Lafe Langford Jr. told AFP.

Adran LeBaron, the father and grandfather of some of the victims, said that according to two of the surviving children, their aunt exited her SUV, arms raised in surrender, only to be mowed down with gunfire.

"So where is the mistaken identity? There was no mistake here," he told Mexican TV network Televisa.

The two families involved, the LeBarons and Langfords, have been targeted by criminal groups in the past.

Benjamin LeBaron, the founder of a crime-fighting group called SOS Chihuahua, was assassinated in 2009 after he led protests over the kidnapping of his 16-year-old brother, who was released after the family refused to pay a ransom.

The families are part of a large group of US Mormons who emigrated to Mexico in the late 19th century, fleeing persecution for their traditions, including polygamy.

As they prepared to hold a funeral Thursday for their slain loved ones, details continued to pour in on the eight surviving children's harrowing ordeal.

Lafe Langford told CNN that after riddling the cars with bullets and setting one of them alight, the gunmen pulled survivors from one of the cars and told them to flee.

Realizing their shot and bleeding siblings would not make it far, two adolescent children helped others to hide in the brush. One then went for help, he said.

"The details that are coming from them are just -- they're just hard to hear, the heroic actions, the loneliness they felt in those mountains for hours and hours all shot up and wounded, carrying each other in their arms. And just the effort by these six children to survive and come home to their father," he said.

The victims ranged in age from eight months to 12 years.

Another child, a three-month-old baby, was found wounded but alive on the floor of one of the cars, where her mother had put her when the shooting began.

An eight-year-old girl was also missing for more than 10 hours, before being found unharmed several kilometres away.

Information on the case remains murky.

Authorities had initially blamed a different criminal group active in the region, Los Jaguares, but had moved beyond that theory by Wednesday.

That type of round is commonly used in military-style assault rifles.

He said Mexico and the United States would soon launch a bilateral program "to control arms trafficking from the US to Mexico."

He added that 70 per cent of the guns linked to crimes in Mexico come from the United States.

The attack has highlighted the lawlessness in much of the border region, the scene of frequent turf wars between cartels fighting over lucrative drug trafficking routes into the United States.

Mexican Foreign Minister Marcelo Ebrard said Mexico "will share information" with the US Federal Bureau of Investigation (FBI) in the ongoing probe.