'I am not Covid virus': This Indian entrepreneur is now an internet sensation, find out why 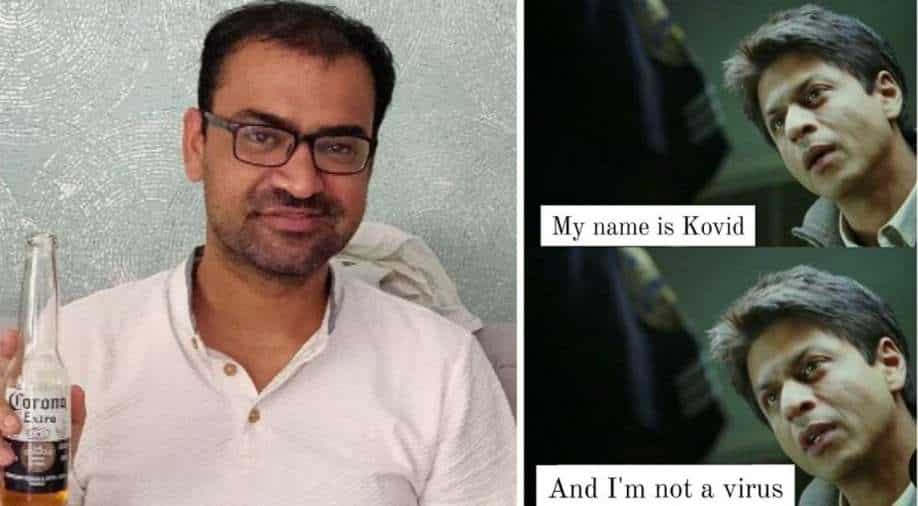 In this photo, Kovid Kapoor poses for a picture while drinking a Corona beer. Photograph:( AFP )

Not Covid, Kovid Kapoor weighed in on the social media buzz around his name. He says his name is Kovid and he is 'not a virus'

"My name is Kovid and I'm not a virus": This witty Twitter bio is of a 31-year-old Indian entrepreneur Kovid Kapoor, who has become an internet sensation just because of his name.

Can you recall anything remotely similar to 'Kovid'? If you say no, then you might be from another planet because as far as Earth is concerned, it has been facing the wrath of the coronavirus (COVID-19) pandemic since late 2019.

The world is not the same (may be in a little funny way) for the Indian travel start-up founder Kovid, whose name is quite similar to the deadly virus that caused the pandemic.

He recently narrated the story when he had travelled outside India for the first time since the onset of the pandemic. He revealed that he "got a bunch of people amused" by his name.

Reflecting on his name, Kovid as quoted by India Today said, "It's funny. We started laughing about it long back. We had these jokes going on in our circle for almost two years and it's surprising that it is going viral now."

He also told the media outlet that his mother named him Kovid, and on being asked about how his mother reacted to the social media buzz, he said, "She is amused like everyone else. People keep sharing screenshots of these viral tweets to her on WhatsApp. We talk about it, she laughs."

The co-founder of Holidify recently tweeted: "Future foreign trips are going to be fun!" The post had been liked 40,000 times and received 4,000 retweets by Friday.

Besides the witty post, the comment section was even more hilarious as it triggered a barrage of jokes, memes, messages and interview requests.

Kapoor has joined in himself, declaring that he was been "Kovid positive since 1990" and posting a picture holding a bottle of Corona beer. "I am Kovid that wants more travel."

Went outside India for the first time since COVID and got a bunch of people amused by my name. 😂

Future foreign trips are going to be fun!

Yes! The only good "positive" news that I could get right now. https://t.co/kWrHuZH4Z3

The sudden spurt of attention was "totally unexpected" but he hoped it would bring some publicity to his business during a "very difficult time" for the sector, he told AFP.

Kovid is a highly unusual name in India but means a scholar or a learned individual in Hindi and Sanskrit, with the 'd' pronounced with a very soft emphasis.

"It's a memorable name with a beautiful meaning," he said. "It makes for a striking introduction with anyone. I'd never change it."