Helping the neighbour: Australian man 'takes the bin out' on friend's request, literally 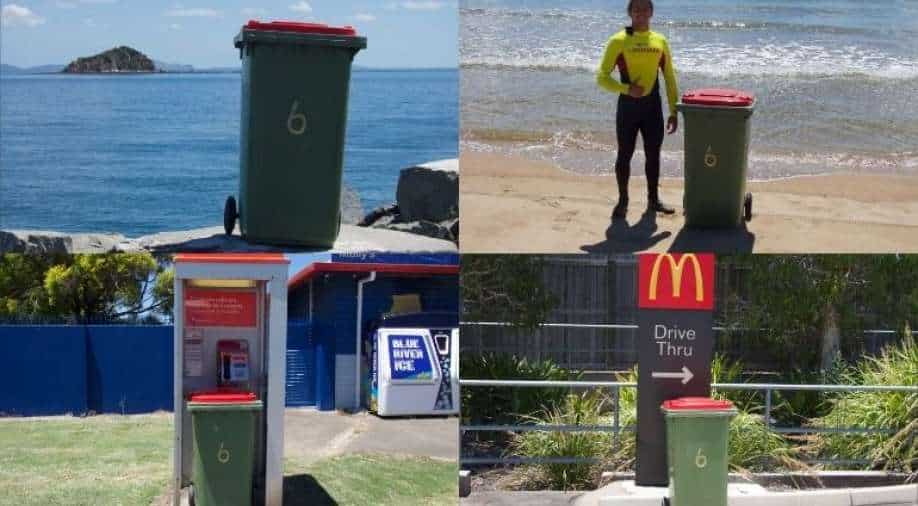 Bin's day out with an Australian man Photograph:( Facebook )

The bin first visited the duck pond where the bin took a 'walk'. After that, the it visited a hardware store where the staff posed with it, and then to a local supermarket

Helpful neighbours are a blessing in disguise, and sometimes also the ones who make you laugh the most. One such neighbour is an Australian man Carl Stanojevic who went out of his way to 'take the bins out' for his neighbour.

When the 54-year-old photographer’s neighbour, Nick Doherty, messaged Stanojevic for a little help with his dustbins, Doherty was not disappointed.

Nick Doherty from Mackay, Queensland, sent a late night text message to Stanojevic requesting him, "Would you be able to take my bins out please". Stanojevic replied with a joke asking him which all touristy places would he like his dustbin to be taken to, to which Doherty laughed.

However, Stanojevic decided to carry on with his joke the next morning. After the bin was emptied out and cleaned, Stanojevic out the bin in his car and took it for an Australian day out.

"I've known Nick for two years," Stanojevic said. "We catch up for a beer when we can and have a chat and a few laughs. He’s a beautiful person. You’d do anything for him. He said take my bin out. If he had said put my bin out it would have been just a normal day in Mackay."

Stanojevic took his photography gear, selected the bin number six and first visited the duck pond where the bin took a 'walk'. After that, the bin visited a hardware store where the staff posed with it, and then to a local supermarket.

This was followed by a massage parlour, tattoo place and then to get a cold beer. "We went for a massage and then to the tattoo parlour to get a couple of extra 6s on the bin. A bit of a tattoo, then stopped at the pub for a coldie," Stanojevic said.

The bin also visited a band of local cleaners, surf lifeguard, a garbage truck driver and then proceeded for a quick drive-though at three different restaurants, which ended with a phone call at a public phone booth. "It wasn't really talking to anyone," Stanojevic laughed. "It was just talking trash."

After a five-hour trip around the city, the photographer sent a bunch of pictures as evidence of a fun-filled outdoor day of the bin to its owner.

He also expressed relief and happiness that his little joke was able to pit a smile on faces of so many people around the world in these tough times of coronavirus pandemic. "It's good that it's taken the focus off all this heartache with these lockdowns and Covid and that’s the idea of it," he said. "We've definitely put a hell of a lot of smiles on people’s faces."