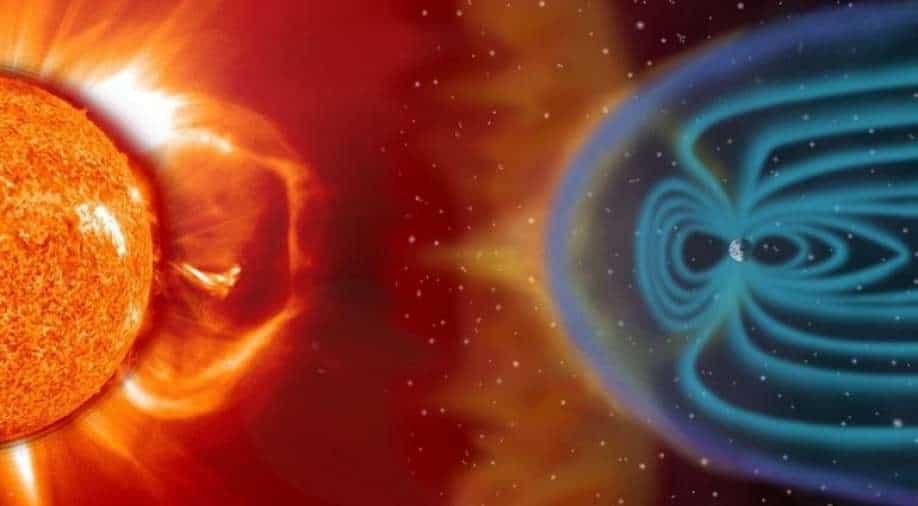 In this picture, an artist's illustration of a geomagnetic storm can be seen. Geomagnetic storms are caused by ejections of the solar corona into space, resulting in disturbances to the Earth's upper atmosphere and increased drag on objects in low orbits. Photograph:( Twitter )

The Earth is expected to be hit by a solar storm on Wednesday and Thursday due to ramped up activity by the Sun. The forecast has been made by the Space Weather Prediction Center (SWPC) of the National Oceanic and Atmospheric Administration (NOAA).

According to the Space Weather Prediction Center of National Oceanic and Atmospheric Administration (NOAA), Earth will be slammed by a geomagnetic storm on Wednesday and Thursday.

It will, however, be a modest one, according to NOAA, which has classified it as G1.

G1 to G5 are the several types of geomagnetic storms, with G5 being the most powerful.

On March 3, a coronal mass ejection from a 25-degree-long filament lifted off the sun, according to NOAA.

In addition to bringing the aurora to higher altitudes, these storms could have an influence on electrical infrastructure, such as power grids and power plants, radio and satellite communications, and navigation systems.

On March 4, a second filament eruption occurred, but it appears that the CME from that event will have little effect on Earth.

What is a geomagnetic storm?

A solar coronal mass ejection (CME) or (much less severely) a co-rotating interaction region (CIR), a high-speed stream of solar wind emanating from a coronal hole, could be the source of the magnetic storm.

With the solar cycle, the frequency of geomagnetic storms rises and falls.

At solar maximum, geomagnetic storms are more common, with CMEs causing the majority of them.