Dog with over 100k Instagram followers is living life king-size 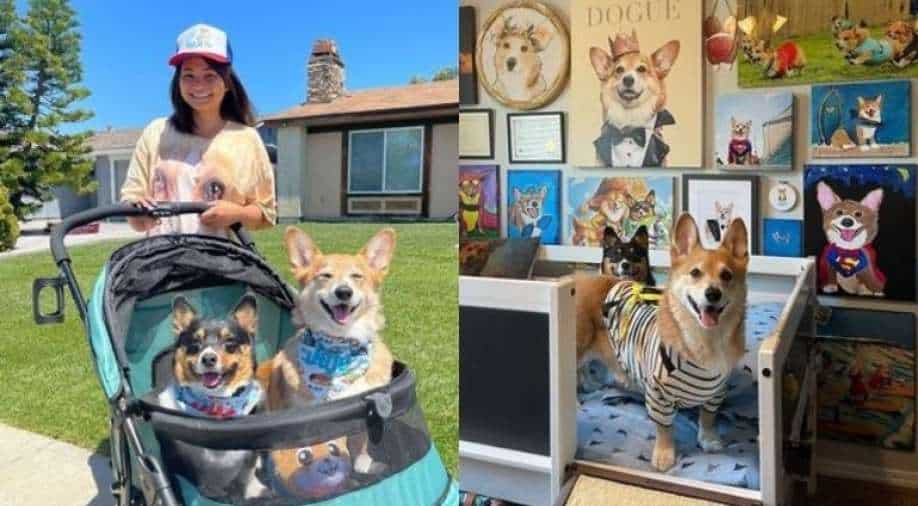 Jojo in his corgi-themed bedroom and owner Josephine Zosa with Jojo and Kilo. Photograph:( Instagram )

Corgi Jojo has his own room, which is decorated with self-portraits and corgi-themed toys, as well as a closet full of wetsuits for when he goes surfing.

Despite the fact that humans keep a variety of animals, the dog is the most commonly reared.

Many people treat their pet dogs as if they were their children, and they love and care for them.

People do whatever they do for their children for them.

People even build buildings for them to live in, but do you know of any dogs who live as if they are humans?

Yes, there is such a dog in California, America, that enjoys all of the creature comforts that people desire.

She looks after Jojo as if she were her own child.

The fact that she has created a separate room for Jojo demonstrates how much she loves him.

Speaking to the Mirror, Josephine, from San Diego, California, said: "I always wanted to have a house of my own so I could give Jojo his own room.

"We have always lived in an apartment and moved around a lot but finally last year we got our own house with a garden.

She has spent thousands of dollars arranging her pet pooch's bedroom, claiming he can spend up to six hours a day in there playing with toys or watching his favourite Disney Plus shows.

Because she doesn't have "any human kids," the 35-year-old adopted Jojo when he was four months old and treats him like her own child.

He has a sizable social media following, having 119,000 Instagram followers under the handle Super Corgi Jojo.

One follower gushed about his room, saying, "This is the kind of crazy corgi parent we aspire to be."