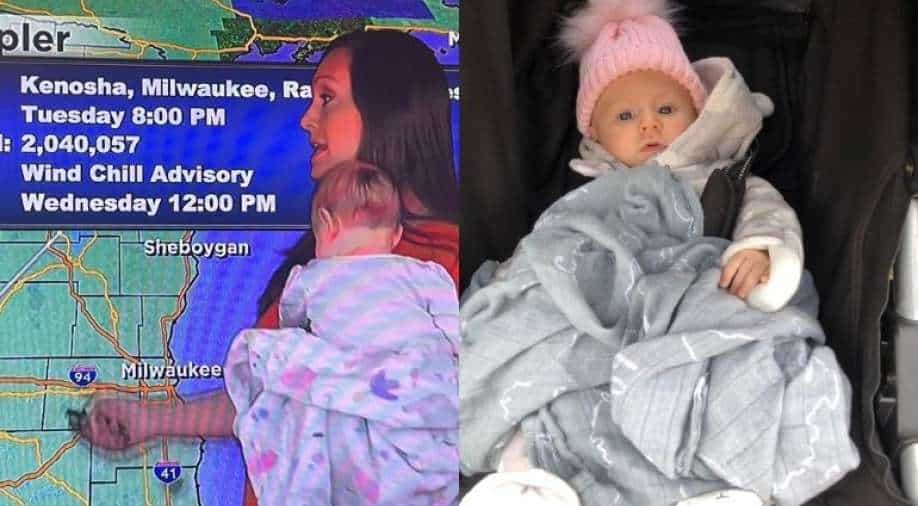 It was a big hit among colleagues and viewers. The weather forecast has been viewed thousands of times across Twitter, YouTube and Facebook since it was posted

How do you break bad weather news to viewers? Distract them with something...or someone cute.

This may be exactly what a meteorologist from Milwaukee did.

“She’s prepared. She’s got one of her good thick blankies here for that cold weather that’s coming up tonight,” said Rebecca, holding Fiona.

“I thought she could help me with tonight’s first weather that’s going to be plenty unpleasant, right?”

Schuld, who had just returned to work after maternity leave, told Yahoo Life that Fiona's appearance was completely unplanned.

“I was just minutes away from having my next weather broadcast, and my baby had just woken up,” she said.

“I go over to my Greenwall. I’m holding her and our producer is like, ‘Oh, your baby, is she gonna make an appearance?’ I was very confident she was going to behave because she just took a long nap so I knew she’d be happy. I said, ‘sure!’”

Also read | No kidding, a bubble that lasted for 465 days!

This forecast has won hearts online.

Loved seeing @RebeccaSchuld on the air with her daughter, Fiona. Rebecca is working from home right now and Fiona had just woken up. They are so sweet together! #moms #reallife #cbs58 pic.twitter.com/oQDBdF0OsO

Schuld tweeted after the broadcast that they were “shining a light on what real life actually looks like, trying to do it all & how Covid has changed the way we conduct work.”

It was a big hit among colleagues and viewers. The weather forecast has been viewed thousands of times across Twitter, YouTube and Facebook since it was posted.

Since then, the station has featured a segment on pandemic parenting, including how their forecasters juggle the demands of work and parenting.