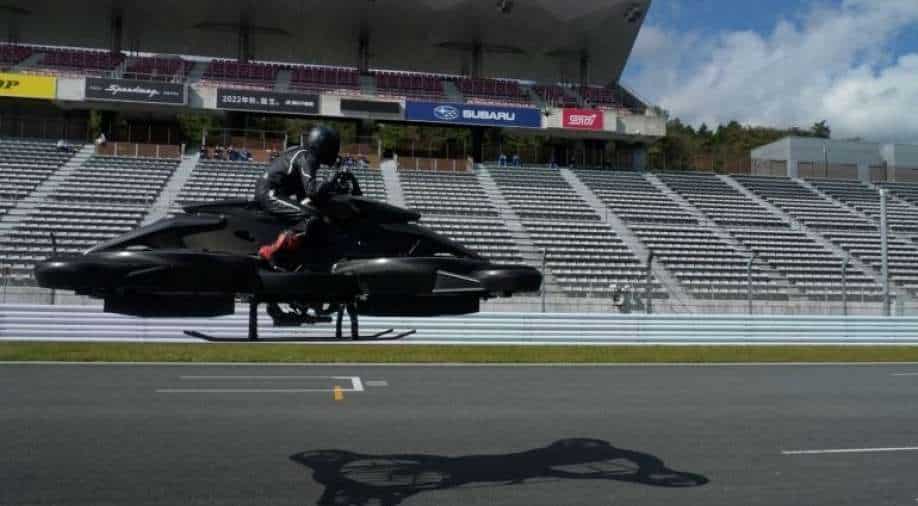 A Japanese startup, known as A.L.I. Technologies, has launched a hoverbike worth $680,000 to target supercar users.

It is environment friendly and on a single charge can fly at a top speed of 100km/hr. It is equipped with a conventional engine and four battery-powered motors.

Also read | Want a flying car? You may take a look at Jetson One

Resting on landing skids when stationary, the black and red hoverbike consists of a motorcycle-like body on top of propellers.

According to Chief Executive Daisuke Katano, ''Until now the choice has been to move on the ground or at scale in the sky. We hope to offer a new method of movement.''

Commercial success for A.L.I. Technologies, whose suppliers include engine maker Kawasaki Heavy, would help reinforce Japan's industrial edge amid a generational shift towards new technology such as autonomous and electric vehicles.

The growth of sectors like ride-sharing has been hobbled due to Japan's strict regulations driven by safety concerns. The country faces the problem of overcrowding as Tokyo alone has 13.5 million residents.

Uber along with aviation corporations as well as venture capitalists are also investing heavily in the burgeoning flying automotive industry, which analysts say could be worth as much as $1.5 trillion by 2040.

Global sales of electric vehicles (EVs), estimated at 2.5 million vehicles in 2020, are forecast to grow more than 12-fold to 31.1 million by 2030 and account for nearly a third of new vehicle sales, as per consulting firm Deloitte.

Promising an era of personal air transportation from jetpacks to flying taxis, funding is flowing to startups from California-based Joby Aviation to Israel's AIR.