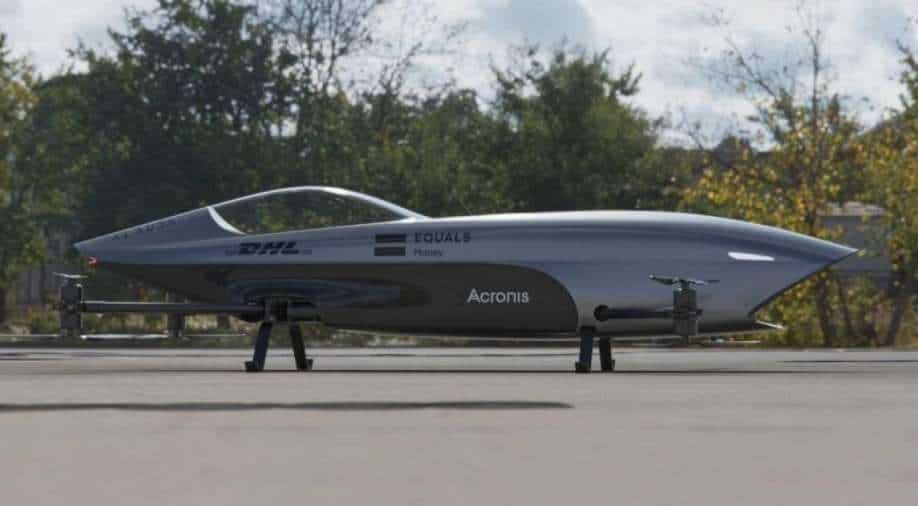 The Mk3 Airspeeder is a multicopter craft based on a Formula 1 car and has a greater thrust-to-weight ratio than an F15 fighter jet, according to Alauda

The decades-old dream of zipping around in the sky as simply as driving on highways may be becoming a reality faster than we thought.

A full-size pilotless 'flying race car' has taken to the sky for the first time ahead of remotely piloted races to be held later this year at three international locations still to be revealed.

"It is a momentous day," founder and chief executive of Adelaide-based Alauda Aeronautics, Matt Pearson, said in an interview.

"To be able to showcase the Mark 3 to the world and show that flying car racing is just around the corner."

The Mk3 Airspeeder is a multicopter craft based on a Formula 1 car and has a greater thrust-to-weight ratio than an F15 fighter jet, according to Alauda.

Pearson's eventual plan is the Airspeeder Race Series of piloted multicopters, but he is using their EXA Series, with remotely controlled Mark 3s, as a proving ground.

"The EXA Series will always be a feeder series to the main Airspeeder event and the crewed racing that's coming. And the cool thing is it'll always be with full-size vehicles, fully functional electric flying cars, just remotely piloted for now," Pearson said.

Battery sizes, air traffic control, and other infrastructure issues are among the many potential challenges to commercialising them.

The pilots will remotely race on augmented reality sky-tracks visible to an audience watching via a digital stream.

"We don't need a track," Pearson said, "but it's important to convey what's going on to the audience at home."

Alauda Aeronautics are themselves involved in a race to be the first of several companies hoping to race manned drones or eVTOL vehicles.

Air Race E has partnered with European planemaker Airbus to launch races of 3 different classes of electric aircraft including eVTOL.

"I looked back at what happened 100 years ago," Pearson said.

"In the last great mobility revolutions when the dawn of the automobile and the airplane and what accelerated that? What drove acceptance? What drove technology? It was always racing. If you go back far enough the first application is always racing."