'You haven't got a lot of runs': Mayank Agarwal reveals advice from Rahul Dravid before his heroics vs NZ 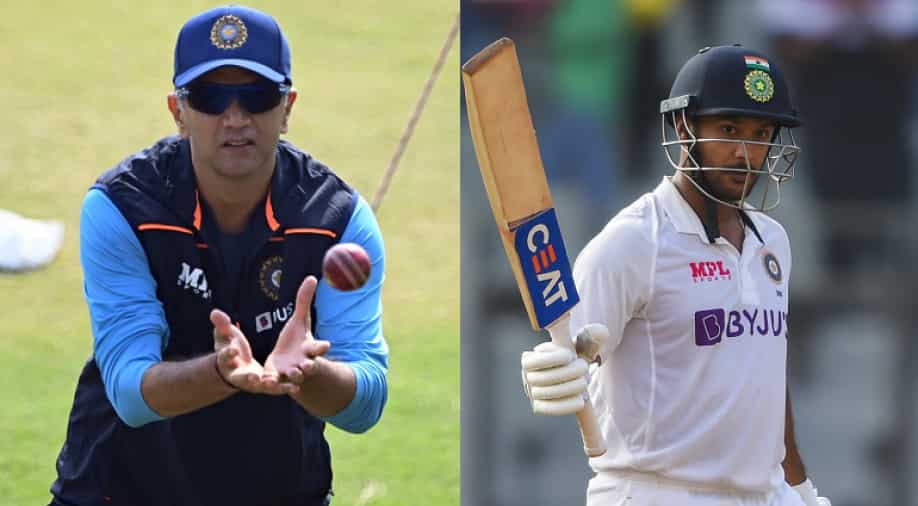 Mayank Agarwal revealed advice from Rahul Dravid ahead of his heroics in Mumbai Test vs New Zealand. Photograph:( AFP )

Indian Test opener Mayank Agarwal has revealed advice from head coach Rahul Dravid before his batting heroics in the second Test against New Zealand in Mumbai.

Indian opener Mayank Agarwal was a stand out performer for his team with a century and a fifty in the second Test against New Zealand in Mumbai. However, his efforts were outshone by New Zealand spinner Ajaz Patel, who bagged a historic ten-wicket haul in the game to become the only third bowler in the world to achieve the massive feat. Patel joined the legendary Anil Kumble and Jim Laker in an elite list of bowlers to have taken all ten wickets in an innings of a Test match.

It was a crucial game for Agarwal, who was struggling with his form in the run-up to the Test match with many suggesting he should be the one making way for returning skipper Virat Kohli in the Mumbai clash. However, Agarwal responded to his critics in style with a terrific display with the willow.

Opening the innings with Shubman Gill in the first innings, he slammed a brilliant knock of 150 runs to help India post a strong total of 325 runs on the board despite Patel's ten-wicket haul. He followed it up with a 62-run-knock in the second innings to continue his purple patch as India registered a big win by 372 runs.

Agarwal recently revealed advice from head coach Rahul Dravid ahead of his heroics in the second Test against the Black Caps. Dravid had asked Agarwal to just manage his emotions and mental energy as the batter had been struggling with his form for a long time.

“He (Dravid) said I know you haven't got a lot of runs but just manage your emotions. Manage your mental energy and your thoughts. Don't dwell too much on it, he helped in the mental aspect," Agarwal was quoted as saying by Sportskeeda in an interview.

“On the technical aspect, he insisted that this is the technique which gave you a lot of runs in the past. Just stick to that, the runs will come. Back the things that have worked for you, and fortunately in the very next innings, the runs came,” he added.

Despite being outshone by Patel, Agarwal had a memorable outing as he joined an elite list of openers featuring the likes of Sunil Gavaskar to have scored a hundred and a half-century in the same Test match while opening the innings in a Test match at the Wankhede Stadium in Mumbai.

He will be now seen in action when India take on South Africa in a three-match Test series on their upcoming tour of the country later this month.