Yearender 2020: From Dhoni's retirement to Hamilton's 7th - Check out the most memorable sporting moments 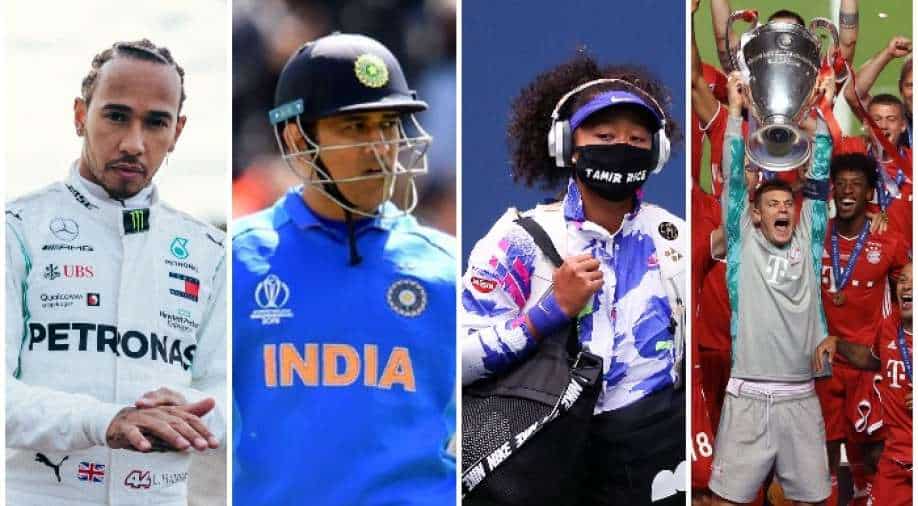 Yearender 2020: The year 2020 was supposed to be gruelling and hectic across sports. The year started normally but chaos struck when the novel coronavirus started to take almost every country under its dreaded wings. Sporting events suffered postponement, cancellations before eventual resumption under tough circumstances. As the unforgettable year 2020 comes to an end, let us take a look at some of the most memorable sporting moments of the year.

Yearender 2020: The year 2020 was supposed to be gruelling and hectic across sports. The year started normally but chaos struck when the novel coronavirus started to take almost every country under its dreaded wings. Sporting events suffered postponement, cancellations. Even the unthinkable happened. The 2020 Tokyo Olympics were also rescheduled by a year. After months of lockdown, life started to return to normalcy. Sporting events resumed albeit behind closed doors while maintaining strict COVID-19 protocols.

Tournaments, leagues, series opened up as grounds welcomed back the athletes. Records were shattered, TV ratings reached new heights as fans, who were in a dearth of sport, tuned to watch their favourite teams and players play.

As the unforgettable year 2020 comes to an end, let us take a look at some of the most memorable sporting moments of the year.

ALSO READ: From NBA to Super Bowl: Here's complete list of winners in 2020

With 2020 being a strange year, the footballing world saw one of the unlikeliest incidents. Barcelona megastar Lionel Messi handed in a transfer request, via a burofax, to Barcelona urging the Spanish giants to release him from his duties after serving them for close to two decades. Messi and Barcelona are like a pure love story but Messi’s relation with club president Josep Bartomeu turned sour. The Argentine maestro gave an explosive interview during the entire episode where he revealed how unhappy he is at Nou Camp while revealing why he wanted to leave the club. Ultimately, Barcelona didn’t allow Messi to leave and the Argentine stayed put at Nou Camp to avoid a legal battle with the club he loves.

With uncertainty and risk factor surrounding COVID-19, Rafael Nadal decided to skip the US Open 2020 but returned back to his favourite – Rolland Garros – as he continued to shatter the record books. Nadal steamrolled to the final, without even dropping a set, to set a blockbuster clash with Novak Djokovic. The Spaniard went on to defeat world number one Djokovic 6-0, 6-2, 7-5 to claim his 13th French Open title while equalising Roger Federer’s 20 Grand Slams.

Wanted to share a nice picture with you 😉
@rolandgarros
👉🏻 #Paris #13 #Vamos 💪🏻😘 pic.twitter.com/SNgy5YYWCa

Naomi Osaka lets her masks do the talking:

The year 2020 saw the entire world, including many high-profile athletes, speak out against racial discrimination. Following the death of an African-American man George Floyd in Minneapolis, under police custody, massive outrage broke out. Naomi Osaka, not only joined the protests in US, but also wore masks during the US Open, with names of black victims of police brutality in the US. Osaka made seven masks for the US Open with a view of reaching the final of the Grand Slam event and not only did she reach the final but also lifted the coveted trophy by winning a nail-biting summit clash.

.@naomiosaka walked out in a Breonna Taylor mask for her night match at Arthur Ashe stadium.#USOpen pic.twitter.com/Ubxwst54kl

Former India captain and one of the most decorated cricketers of all-time, Mahendra Singh Dhoni announced his retirement from international cricket on August 15, 2020. Dhoni, who doesn’t do many interviews, took to social media platform Instagram to post a classic Indian song merged with images from his career as he quit international cricket in the most MS Dhoni-esque fashion one could imagine. The entire cricket fraternity was left emotional by Dhoni’s retirement and poured heartfelt tributes to the legendary Indian captain. Dhoni participated in the Indian Premier League (IPL) 2020 for Chennai Super Kings and will continue to do so for the time being.

Under the guidance of Jurgen Klopp, Liverpool ended their 30-year wait of lifting the Premier League title as the Reds comfortably won the league by 18 points. Liverpool accumulated a staggering 99 points, 18 more than second-placed Manchester City, to break the Premier League title drought. In 38 matches, Liverpool won 32 matches while drawing three and losing as many in what is regarded as one of the best seasons for English top-flight club.

Australia Women’s team continued to stamp their authority in world cricket as they lifted their fifth ICC Women’s T20 World Cup title on March 8. It was one of the last major tournaments in world sport that featured capacity crowd. As many as 86, 174 fans witnessed the summit clash between India and Australia at the iconic Melbourne Cricket Ground in what was a record crowd for a women’s cricket game. Australia won the final by 85 runs.

Hailed as one of the best F1 drivers of all-time, Lewis Hamilton equalled Michael Schumacher’s record of winning seven world championships. Shattering the record books, Hamilton won 11 of the 17 races in 2020 F1 season to take his tally past Schumacher’s 91 Grand Prix wins to 95. Utilising a breathtaking Mercedes car, Hamilton skipped past everyone to record one of the finest seasons of all-time in F1 history. If reports are to be believed then Hamilton will soon be honoured with knighthood and will become one of the few sportspersons to have achieved the tag of ‘Sir’ during their playing days.

Indian Premier League in the UAE:

The Indian Premier League (IPL) 2020 suffered postponement after the outbreak of coronavirus in India. The Board of Control for Cricket in India (BCCI) decided to take the money-spinning T20 tournament to the United Arab Emirates (UAE) amid the pandemic and to everyone surprise, it pulled off the event without a hitch. Even though it was played in front of empty stands, IPL 2020 was widely watched and celebrated by the sporting fans and shattered television records. The tournament became the first multi-team cricket tournament to take place after COVID-19 enforced break in March.

Bayern Munich win it all:

German giants Bayern Munich completed a quintuple as they won the German domestic treble while winning the UEFA Champions League and UEFA Super Cup. Due to COVID-19 pandemic, the FIFA Club World Cup was cancelled or else, Bayern Munich would have had a real shot at winning all six trophies in club football – achieved by a few clubs till date. Not only did Bayern Munich compete as a team, their striker Robert Lewandowski, who had a sensational season in front of the net, was awarded UEFA’s Best Player of the Year award as he beat Lionel Messi and Cristiano Ronaldo to lift the coveted title.

The Indian cricket team were bundled out for their lowest-ever Test score (36) by Australia in the Adelaide Test - the first of the four Test matches of the blockbuster series. India were left stunned by the Australian bowlers as the visitors surrendered in front of the hostile Aussie attack. India went on to lose the match by eight wickets and concede an early 1-0 series lead to Australia. While many teams have been down and out with low confidence and self-doubt, India bounced back strong, without their talisman Virat Kohli, in the Boxing Day Test to dominate Australia and win the match by eight wickets. As Indian head coach Ravi Shastri said, this win will be regarded as one of the greatest comebacks/wins of all-time.

https://t.co/eQNZo0Ou2G! 👏👏#TeamIndia bounce back in style to beat Australia by 8⃣ wickets to level the four-match series. 👍👍 #AUSvIND