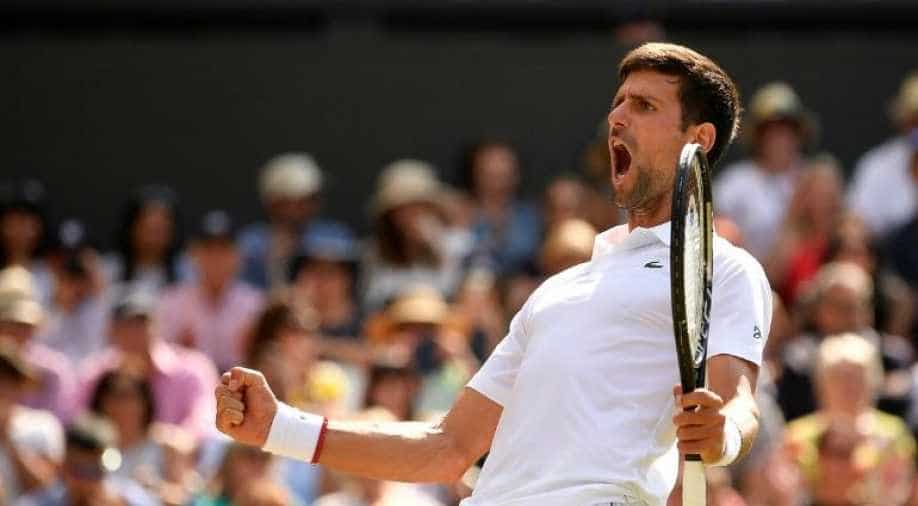 Djokovic's 6-2, 4-6, 6-3, 6-2 success was the 12th victory in his last 13 Grand Slam semi-finals and he is now one win away from his fifth title at Wimbledon and 16th Grand Slam singles crown as he resumes his great rivalry with Federer

Top seed and defending champion Novak Djokovic held off a spirited challenge from Spanish outsider Roberto Bautista Agut on Friday to triumph in four sets and advance to a mouthwatering Wimbledon final against Roger Federer.

Remarkably the Serb's 6-2, 4-6, 6-3, 6-2 success was the 12th victory in his last 13 Grand Slam semi-finals and he is now one win away from his fifth title at Wimbledon and 16th Grand Slam singles crown as he resumes his great rivalry with the Swiss.

Friday's match turned on an amazing 45-shot rally in the seventh game of the third set, which Djokovic won to hold serve and stay a break-up and from then on he took total control as the Spaniard, who had looked calm and confident in his first Grand Slam semi-final, was eventually brushed aside.

"I had to dig deep. It's the semi-finals and Roberto was not overwhelmed - he's a very under-rated player," Djokovic, 32, said.

"He played really well. He was managing his nerves in the first set but later on he established himself and started to play better. I got a bit tight. It was a close opening four or five games of the third set - that's where the match could have gone a different way," he added.

Bautista Agut flashed a brilliant return past Djokovic from the first serve of the match but he barely threatened for the rest of the set as his high-risk approach produced too many errors and a provided a straightforward set win for the favourite.

The second was a different story as Bautista Agut dialled back a little and found that he was able to out-duel the master. Djokovic was making uncharacteristic errors on seemingly simple shots and was frequently left staring skywards, questioning himself and taking issue with the crowd.

Bautista Agut snatched a break in the third game and served superbly to back it up, dropping only four points in five successful service games to level the match.

The Centre Court crowd realised they had a real match on their hands and they were treated to a superb third set. It, and probably the match, hinged on the seventh game as Djokovic, a break to the good, served at 30-40.

The players then smashed out their 45-shot rally, much of it a mesmerizing exchange of identical crosscourt backhands that had the crowd gasping before Djokovic blinked first to switch the angle of attack and take the point with a devastating winner.

It was the longest rally officially seen at Wimbledon since records began in 2005 and Djokovic duly served out and stayed on top to take the set.

The champion then took command in the fourth set, cutting out the loose groundstrokes and picking up points with adventurous serve-and-volley attacks and after breaking for a 2-1 lead he never looked back.

"Obviously winning that game was crucial for me," Djokovic said of the marathon rally game. "It gave me more confidence and relief so I could swing more freely in the next games."

Bautista Agut had no answers but can be pleased with his efforts in what is turning out to be the best year of his career, having never previously reached even a quarter-final at a Grand Slam.

The 31-year-old can now join his friends on a belated stag break. They arrived in London to watch Friday's game after his planned Ibiza trip was cancelled following his unexpected progress to the last four.

Djokovic, however, has got more business to attend to as he prepares to face 37-year-old eight-times Wimbledon champion and number two seed Federer in Sunday's showpiece.

"Regardless of the history and many finals I've played, playing a final at Wimbledon is something different so I'll definitely enjoy that experience," he said.