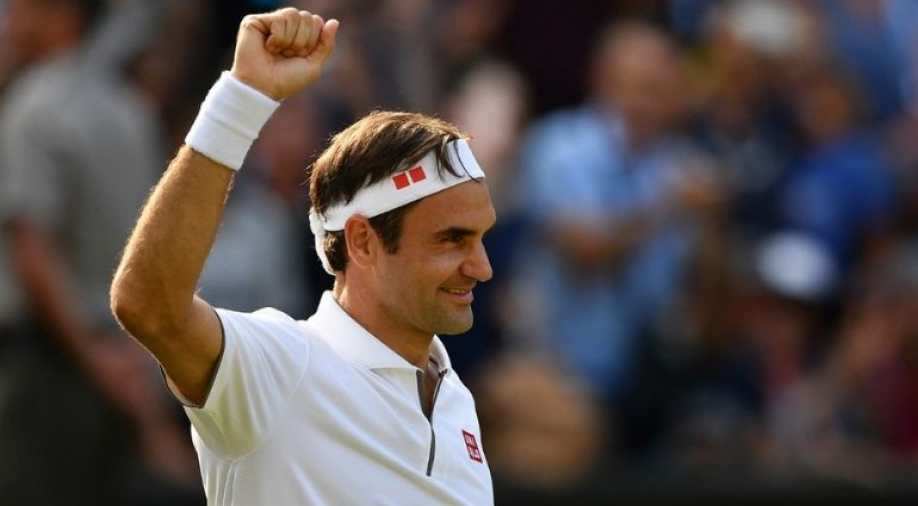 Roger Federer chalked up another monumental milestone to reach the Wimbledon semi-finals on Wednesday, recovering to beat Japan's Kei Nishikori in four sets and become the first man to record a century of singles wins at any Grand Slam.

Federer, who won 4-6, 6-1, 6-4, 6-4 and now faces Rafa Nadal in a mouthwatering contest, was so poor in the first set that the eighth-seeded Nishikori may have felt the 37-year-old Swiss's advancing years had finally caught up with him.

Yet the remainder of the match had just enough flourishes of pure brilliance from the eight times champion and number two seed to make it a worthy occasion for the Swiss to become the sole male member of the Grand Slam 100 club.

Federer's victory ensured Wimbledon will play host to one of the sport's greatest rivalries after Nadal also overcame big-serving American Sam Querrey in straight sets to tee up a semi-final clash between the two old foes.

The duo have not met at the All England Club since their titanic tussle in 2008 final when Nadal outlasted Federer over five thrilling sets that finished late in the evening gloom.

The two most successful proponents of the men's game have gone toe-to-toe on 39 occasions, with Nadal winning for the 24th time in their French Open semi-final last month.

To put Federer's achievements at Wimbledon into perspective, Nadal's straight-sets victory at Roland Garros was his 92nd on Paris's red clay and while a 93rd and 12th singles title duly followed, he is still short of Federer's Wimbledon ton.

"It's special," said the Swiss of his latest numerical feat. "If I look back at the hundred, some were so incredibly cool."

There was a brief time on Wednesday, however, when it looked like Nishikori may play party pooper.

Federer's poor start was seemingly not down to any devilish play or beguiling gameplan from Nishikori, but rather the result of a dramatic drop in standards by the number two seed.

His timing was off, the usual sweet sound of ball-on-racket that is almost unique to the great Swiss was absent, replaced by a duller thud as shots repeatedly flew off target.

The crowd sat dumbfounded as Nishikori despatched a delicate volley to break in the opening game and watched on bemused as the Japanese created another three break points in the third game and one more in the fifth.

In winning that opening set, Nishikori, one of tennis's most attractive shotmakers, carved out as many breakpoints on the Federer serve as the Swiss had faced in his previous two matches.

"Even if I'm down a set or down a break, no hurry there. I stay calm," said Federer, whose ability to stay ice cool under pressure seemed to be the only part of his game still functioning in the first set.

Yet when you have spent the best part of two decades weaving magic spells on Centre Court, you know how to pull a rabbit out of the hat when you most need it.

In the blink of an eye, the impostor who had seemingly replaced Federer in the early games was nowhere to be seen as the real deal strode out for the second set and promptly won 12 points in a row to take a 3-0 lead.

The ragged, leggy lethargy of the Swiss's early play had lifted and in its place, a piercing focus carried Federer to the second set in 22 minutes.

Nishikori kept the match alive as a contest but was constantly battling to defend his serve and one running backhand by the Swiss was delivered with such devastating venom that the Japanese could only bow his head in appreciation.

Federer delivered the decisive blows against the Nishikori serve in the seventh game of the third set and ninth game of the fourth before the contest was ended after two hours and 36 minutes when the Swiss fired down a 12th ace.