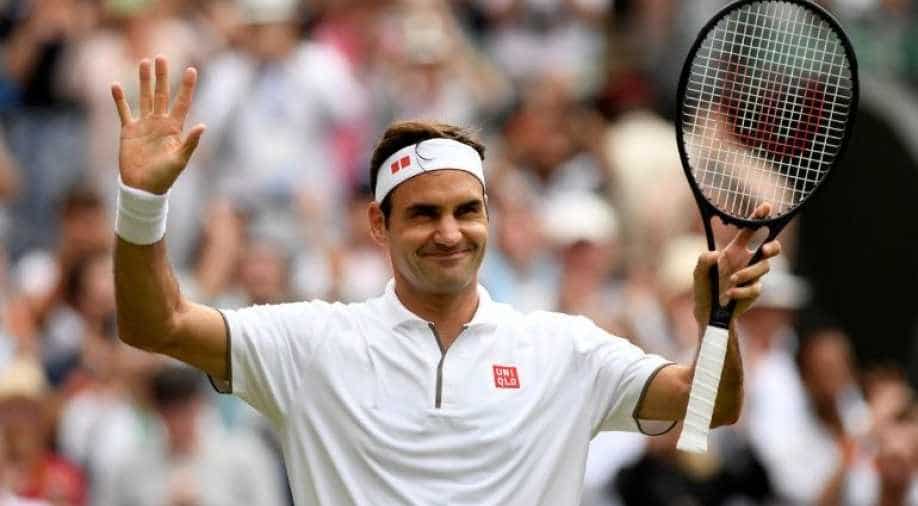 Roger Federer can rack up his 100th win at Wimbledon on Wednesday and set-up a blockbuster semi-final against Rafael Nadal.

In a quarter-final line-up which features five players over 30, there is a growing anticipation of a potential 40th career match-up between the sport's two most successful players.

If it does happen, it will be their first at the All England Club since 2008 when Nadal triumphed in what is widely regarded as the greatest final ever played at the tournament.

However, before they reach that stage, eight-time champion Federer has to get past Kei Nishikori while Nadal, a two-time winner, tackles big-hitting Sam Querrey.

Whoever battles through that side of the draw is likely to find defending champion and four-time winner Novak Djokovic waiting in the final.

At 37, Federer is the oldest quarter-finalist since Jimmy Connors in 1991.

He reached his 17th quarter-final at the All England Club -- and 55th at the majors -- with a 74-minute demolition of Italy's Matteo Berrettini, dropping just five games.

Between them, Federer, Nadal and Djokovic lost only 19 games in their fourth-round ties and faced just one break point.

"I think the best guys now are fully engaged, they know exactly what to expect from the court and the conditions," said second seed Federer.

Everything you need to know about men's quarter-finals day. #Wimbledon https://t.co/yuyDJCz2Pf

"That helps us to play better. I think with experience, that's good. We haven't dropped much energy in any way."

Federer will take a 7-3 record over seventh-seeded Nishikori into his quarter-final.

Nishikori defeated the great Swiss in the ATP Finals last year, ending a drought which had stretched to almost five years.

"I'm a big fan of his game," said Federer of the Japanese star, who is into his second successive quarter-final at Wimbledon.

"I think he's got one of the best backhands in the game. He's a great return player. Solid mentally. I always thought he was a great talent."

Nishikori is bidding to become the first Japanese man since Jiro Satoh in 1933 to make the semi-finals at Wimbledon.

Nadal, playing in his seventh Wimbledon quarter-final, faces Querrey backed up by a 4-1 record over the 65th-ranked American.

Querrey made the semi-finals in 2017, beating then world number one Andy Murray in the last-eight before falling to Marin Cilic.

The American has pounded down 100 aces so far at the tournament, dropped serve just once and accounted for fifth seed Dominic Thiem in the first round.

"When he plays well, he can be very, very dangerous on all surfaces," said Nadal, whose recent 12th French Open title took him to 18 majors, just two back from Federer's record.

Querrey hopes to be the first unseeded player in the semi-finals since Marat Safin and Rainer Schuettler both made it in 2008.

Top seed Djokovic has a 5-1 record over his quarter-final opponent David Goffin who, at 28, is the youngest man left.

Belgian 21st seed Goffin beat Djokovic the last time they met in 2017 but that was on the clay of Monte Carlo.

Goffin is playing in his first All England Club quarter-final but was runner-up to Federer on the grass of Halle on the eve of Wimbledon.

"He's one of the quickest players on the tour. I think his footwork is probably his biggest asset," said Djokovic ahead of his 11th Wimbledon quarter-final and 45th at the Slams.

Wednesday's other quarter-final pits Argentine 26th seed Guido Pella, who had never previously got into the second week of a Slam, against Spanish 23rd seed Roberto Bautista Agut.

Whereas 29-year-old Pella is in unchartered territory, Bautista Agut is in his second Slam quarter-final of the season having also gone to the last eight at the Australian Open.

Pella has spent six more hours on court than Bautista Agut in getting to his first quarter-finals at the majors.