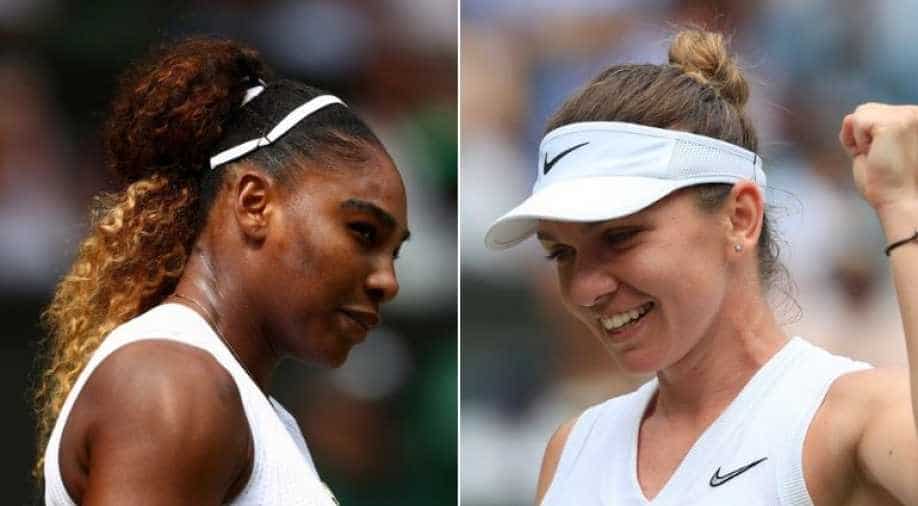 Halep, who was French Open champion in 2018, will be playing in her fifth Grand Slam final

Simona Halep is the last woman standing between Serena Williams and achieving her long-held ambition of equalling Margaret Court's Grand Slam title record after both recorded easy victories in their Wimbledon semi-finals on Thursday.

Seven-time champion Williams made short work of plucky unseeded Czech Barbora Strycova, whose experience of her first ever Grand Slams singles semi-final in her 53rd campaign lasted just under an hour as she lost 6-1, 6-2.

Former world number one Halep's clash with Ukrainian Elina Svitolina lasted a bit longer but the 27-year-old ran out a 6-1, 6-3 victor to become the first Romanian woman to reach the Wimbledon final.

Williams has missed the chance to equal Australian Court's record on two occasions since returning from giving birth -- losing last year's Wimbledon final and then a bad-tempered defeat in the US Open final.

"It feels good to be in the final again after the year I have had," said 37-year-old Williams.

"I love what I do. I have a great job and I am still pretty good at it. I get a remarkable experience every time."

Williams produced a dominant performance on Thursday which has not always been the case during the Championships and she said she would not be taking seventh-seeded Halep lightly.

"She's a tough opponent," said Williams. "We always have great matches. I look forward to it."

Strycova, who never managed to impose her delightful stroke-filled game on her opponent, at least has the consolation of perhaps winning the women's doubles.

Halep, who was French Open champion in 2018, will be playing in her fifth Grand Slam final.

"It's an amazing feeling but I am also excited and nervous. It is one of the best moments of my life," said Halep.

"The match was not easy, the games were long and went deep.

"I fought hard to win this match and I was strong mentally and physically and had the right tactics."

Halep, who had knocked out new star, 15-year-old Coco Gauff in the last 16, lost in her previous semi-final appearance at Wimbledon to Eugenie Bouchard in 2014.

However, she said she was a different player now and had taken to grass.

"I have more experience, I don't give up anymore," se said.

"I plan to be the best version of myself and fight to the end."

The easy manner in which former world number one Halep wrapped up the match had not looked on the cards at the outset.

Svitolina, the first Ukrainian woman to reach a Grand Slam semi-final, and Halep traded shots aplenty and break points in the opening two games which took over 20 minutes to complete but Halep emerged on top with a 2-0 lead.

Svitolina, being watched from the players box by her English coach Andy Bettles and French boyfriend and ATP star Gael Monfils, briefly raised her game to break back.

However, Halep broke again immediately and 24-year-old Svitolina gave an indication of her increasing frustration when she netted a simple volley and lashed out, kicking the ball into the net.

Worse was to come for Svitolina on her next service game wheh Halep produced a stunning shot to go 5-1.

The 27-year-old Romanian dashed across court to get to Svitolina's drop shot and flashed it cross court.

Halep, who had not faced a seeded player until Svitolina, faced some resistance as she served for the set eventually taking it on her sixth set point.

Although Svitolina stayed with Halep for the first part of the second set, the self-belief and fight had gone and when the Romanian broke for 4-3 it was game over.

All that was left was for Halep to blow a kiss skywards in celebration on sealing the match.

Wish we had one more day: Andrew Symonds' sister 'heartbroken', leaves note on his accident site