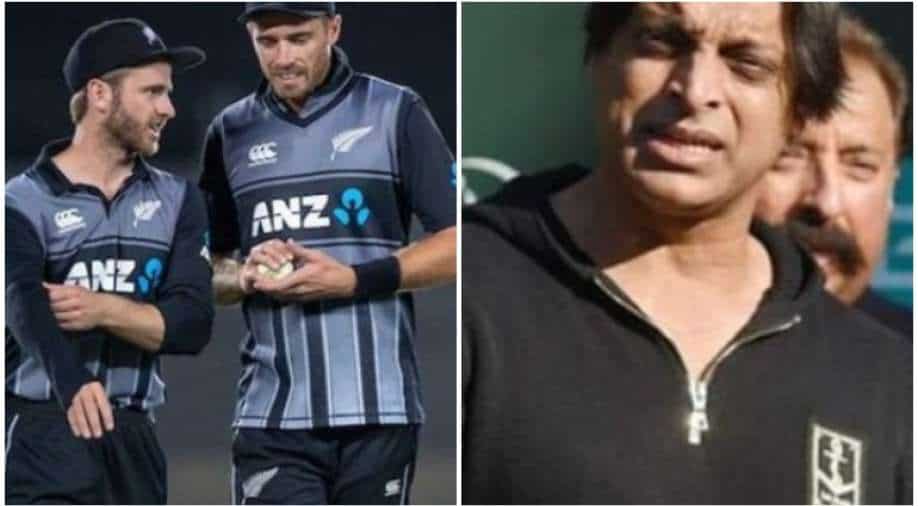 After Pakistan defeated New Zealand in the T20 World Cup 2021, on Tuesday evening (October 26), Rawalpindi Express Shoaib Akhtar once again took a jibe at the Kiwis.

Pakistan got off to a flier in the Super 12 round of the T20 World Cup 2021 edition, in the UAE. The Babar Azam-led Men in Green romped past Virat Kohli & Co. by ten wickets to end the Indian team's 12-match winning streak over Pakistan in World Cups, both ODIs and T20Is, and have now also toppled Kane Williamson-led New Zealand in match 19 of the marquee event to make it two wins in a row.

Opting to bowl first, Pakistan rode on Shaheen Afridi, Imad Wasim and Harish Rauf's (4 for 22) performances to restrict the Kiwis to 134-8. While the run-chase got intense, Pakistan held their nerves courtesy finishing knocks from Shoaib Malik and Asif Ali to to march past the Black Caps.

Many termed the Pak-NZ encounter as a grudge match for the Pakistani line-up, who went through a lot of humiliation after the New Zealand Cricket Board (NZC) pulled out of their tour of Pakistan -- in mid-September -- just before the tour-opener, citing security concerns. The aftermath of the incident led to England also withdrawing from their tour of Pakistan, by not sending both their men's and women's teams.

Hence, former Pakistan pacer Shoaib Akhtar took a jibe at the Kiwis after their Pakistan defeat. He told on his Youtube channel, "Congratulations to New Zealand that they didn’t come to Pakistan but were you safe in the UAE? We forgot to send security within the field because we thought maybe you wouldn’t feel safe on the ground as well."

“I have a request for all Pakistanis and Indians, and all my fans, to please send an e-mail to the New Zealand cricket board that – Pakistan is a safe country but not a safe team to play against,” he further said.

With New Zealand's defeat, Virat Kohli-led India will also breathe a sigh of relief with regard to their qualification hopes. A win for the Black Caps would have made them a strong contender to finish as the runners-up in Pool B and enter the semi-finals. However, the India versus New Zealand tie is being touted as a shootout between the two teams for the second spot, with Pakistan looking certain to top the group and march into the top four.

In this regard, Akhtar told, "Today, for a change, the whole of India was behind Pakistan to win the match. Because if we were to lose today, and if India lose against New Zealand, they would’ve got into real trouble. So, we (Pakistan) saved you (India). We want you to make it to the finals. And we are ready to take on you in the finals."