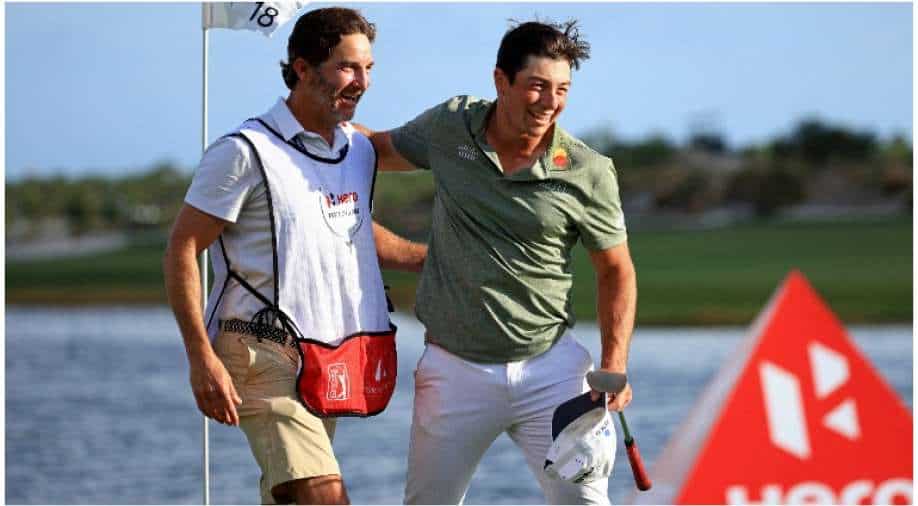 For the unversed, this was Viktor Hovland's third victory in the calendar year. Earlier, he had notched up victories in Mexico in November and in Germany on the European Tour.

The Hero World Challenge ended in a dramatic fashion at the Albany Golf Course on December 05 (Sunday) in Nassau. While all eyes were on American golfer Collin Morikawa -- who had a five-stroke lead over the remainder of the field and was on the verge of becoming the fourth-youngest World No. 1 in golf history -- Norway's Viktor Hovland came from behind and emerged on top to capture his second title of the fall at the tournament in Albany, Bahamas.

Hovland carded back-to-back eagles at the par-4 14th and par-5 15th holes, with a birdie following suit at No. 16 to reach 20 under. There were more twists and turns as he nearly gave away the lead with a bogey on the final two holes at Albany Golf Course, however, the 24-year-old youngster held his nerves to return victorious.

ALSO READ | Tiger Woods reveals to WION his thoughts after accident: ‘It was on the table that I may lose my leg’

Reacting to the surprising turn of events where Hovland triumphed, Krishnaswamy said, "It is never easy on a 5-shot lead especially with 20 of the world's best golf players being in this field. No lead is ever easy to protect. For Morikawa, he crumbled under pressure. Hovlin had the belief in himself and stayed in contention to emerge on top.

On the other hand, Joy opined, "Well, you needed Collin to make those mistakes early on. So early making those two double bogies opened it up for the field. It was a fantastic performance from Viktor."

Krishnaswamy added, "All kind of strange things happened. It was a dramatic day. Viktor coming on top from 6 shots behind....What was more intriguing was in the top 5, four of them were from 25 or under. So you really are seeing a new generational change in world golf. We saw the future of golf this week."

ALSO READ | Bryson DeChambeau gets candid with WION on his unique approach to the sport: 'It's an amazing job for me'

Reacting to his emphatic victory, Hovland told, as per PTI, "Honestly, when I first teed off and obviously got off to just making a few pars early on, I didn't really think winning was even in question." He added, "But after I made three birdies in a row at the end of the front nine and I got to No. 9 and I was in the greenside bunker and I looked up at the leaderboard and I saw I believe I was tied for the lead, maybe one shot behind or something like that, that's when I knew, 'OK, if I play really well on the back nine, I've got a chance."

For the unversed, this was Hovland's third victory in the calendar year. Earlier, he had notched up victories in Mexico in November and in Germany on the European Tour. After the historic win, he was handed the winner's trophy from tournament host and legend Tiger Woods. Beaming with pride, Hovland recalled the time when the legendary golfer had registered his 15th Major at the Masters. Back then, the Norwegian youngster was only an amateur and sat next to Woods at the presentation.

Well, Viktor Hovland has surely come a long way and is set to achieve more success in near future.