'We never give big statements': Virender Sehwag explains why Pakistan have failed to beat India in World Cups 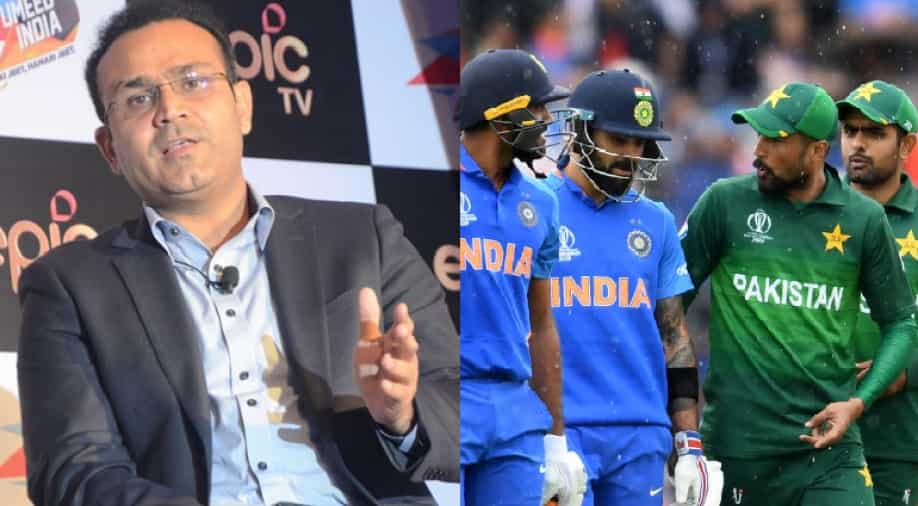 Sehwag explained why India has never lost to Pakistan in World Cups. | Photo - IANS/AFP | Photograph:( Others )

Former India opener Virender Sehwag recently opened up on the rivalry between India and Pakistan and explained why Pakistan have failed to be India in World Cups.

Former India opener Virender Sehwag recently opened up on the rivalry between India and Pakistan. The two teams are set to lock horns in the ongoing T20 World Cup 2021. The blockbuster clash between the arch-rivals will be played at the Dubai International Stadium in Dubai on October 24.

Ahead of the clash, Sehwag explained why Pakistan have always failed to beat India in World Cups. India currently enjoy a flawless winning streak against Pakistan when it comes to both ODI and T20 World Cups and have never lost a game against the Men in Green.

Sehwag said India focuses on preparing well for the game while the Pakistan camp prioritises sending out big statements ahead of the clash between the two teams. Sehwag's response came after he was asked to share his views on the comments of a Pakistani news anchor who said "tareekh badal denge" ( We will change our fortunes ) referring to the clash against India on 'Vishwa Vijeta' show on ABP News.

"If I talk about the 2011 World Cup or the 2003 World Cup, we are under less pressure because our position remains better than Pakistan in the World Cup. So in my opinion, when we play with that attitude, we never give big statements," Sehwag said on ABP News.

"There are always some big statements from the Pakistani side like he [Pakistani news anchor] said at the starting of his show that "We are going to change the date". India never says such things because they go better prepared. And when you go better prepared, you already know what the result would be," he added.

Virat Kohli-led India will hope to keep their stellar record intact when they face Babar Azam & Co. in Dubai on October 24. However, Sehwag believes the T20 World Cup 2021 can be Pakistan's best chance to end India's winning streak against them. Sehwag feels T20 is an unpredictable format thus Pakistan stand a decent chance at beating India this time around.

"We are listening to the same thing for the past many years. And the buildup is always the same that it's a huge game and it is. This topic is always in the discussion that Pakistan hasn't won a match against India in the World Cup and the debate about whether they can win this time is the same too," said Sehwag.

"But if we talk about the current scenario and this format then I think this is where Pakistan always has more chances because they might not play that well in the longer 50-over format. In this format, even one player can defeat any team. But still, Pakistan hasn't been able to do that, we'll see what happens on the 24th," he added.