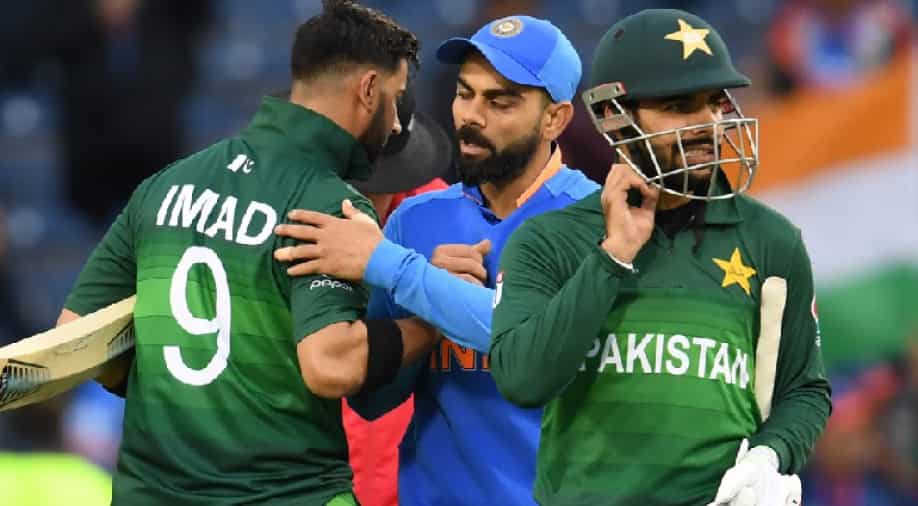 India will take on Pakistan in their opening game of T20 World Cup 2021. Photograph:( AFP )

Former Pakistan cricketer Tanvir Ahmed has claimed Team India are under pressure which is the reason why they have appointed MS Dhoni as the mentor for T20 World Cup 2021.

Former Pakistan cricketer Tanvir Ahmed has claimed that Team India are under pressure heading into the T20 World Cup 2021 which is the reason why they have appointed former captain MS Dhoni as a mentor for the tournament. Dhoni has returned to the Indian dressing room, a year after announcing his retirement from international cricket and will be mentoring the Indian team in the showpiece event in UAE and Oman.

India will open their campaign against Pakistan with a blockbuster clash at the Dubai International Stadium in Dubai on October 24. Ahead of the much-anticipated clash, Ahmed shared his views on India's chances at the showpiece event and insisted that India are a top team but their recent performances have not been up to the mark.

He also pointed out how Virat Kohli's decision to step down as T20 captain after the World Cup shows that he is under pressure and so is the team. The former Pakistan cricketer also raised questions over India's T20 World Cup squad and said most of the players selected were not in the top ten performers in the recently-concluded IPL 2021.

“On paper, there is no doubt that India is a top team. The way they have played cricket around the world, but you have to look at recent performances. Firstly, I’d like to talk about Virat Kohli. He was under a lot of pressure and he quit T20 captaincy. He said I won’t captain in T20s as my performances have not been great," Ahmed said in a show on ARY News and ABP News.

“Then, maybe they were under pressure so they are taking MS Dhoni as a mentor. Even if you look at the IPL, the players in India’s squad were not among the top 10 performers. Their spinners Ravichandran Ashwin and Ravindra Jadeja have not done very well, so of course, there will be pressure,” he added.

India will head into the T20 World Cup 2021 as one of the favourites for the title with significant firepower in their batting and bowling. Having Dhoni as a mentor will also help some of the youngsters deal with the pressure of playing on the biggest stage of them all.

India will face New Zealand on October 31 after the much-anticipated opener against Pakistan before locking horns with Afghanistan in their next game.