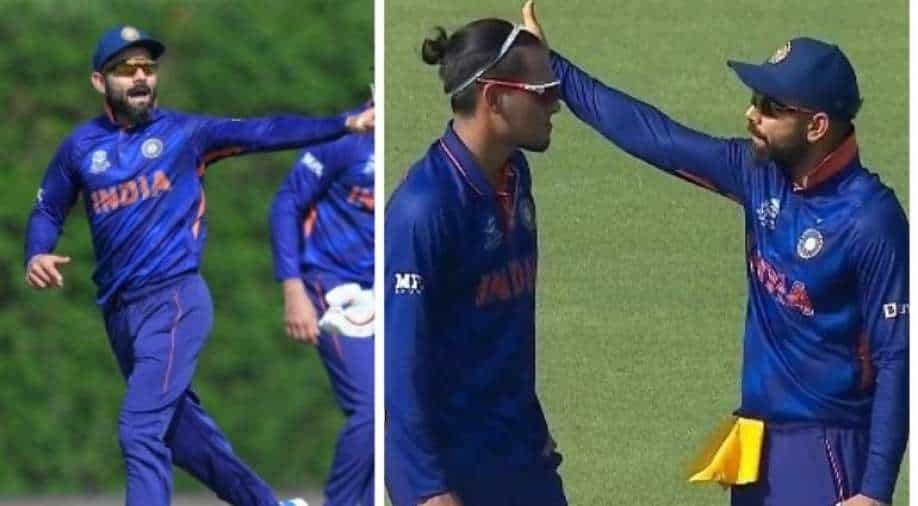 During the match, chasing 153, India got off to a steady start as openers KL Rahul and Rohit Sharma put together 42 runs inside the first six overs

With a standout performance, the Indian team registered a convincing nine-wicket win over Australia in warm-up match in the ongoing T20 World Cup at the ICC Academy Ground on Wednesday (October 20). For India, Ravichandran Ashwin, KL Rahul and Rohit Sharma were the star performers.

Apart from some top-notch performances, an incident, in particular, has grabbed attention when Virat Kohli was spotted instructing the bowler before Royal Challengers Bangalore (RCB) teammate Glenn Maxwell's fall of the wicket. Kohli was rested and he only took the field to bowl, in his absence, Rohit Sharma was leading the team.

During the 12th over, the in-form Maxwell welcomed spinner Rahul Chahar with a stunning boundary. After that, Kohli was seen having a chat with Chahar, who then bowled three consecutive dot balls and finally sent the Australian all-rounder back to the pavilion.

It was a crucial wicket from India's perspective as Maxwell, who scored 37 runs and made a 61-run partnership with Steve Smith, was looking dangerous at that moment.

Rohit and Suryakumar Yadav ensured that India does not suffer from more hiccups, and with the side 26-run away from the target, Rohit decided to retire hurt after playing a knock of 60. In the end, India registered a comfortable victory with Suryakumar (38) and Hardik Pandya (14) remaining unbeaten at the crease.

Opting to bat first, Australia got off to the worst start possible as David Warner (1), Aaron Finch (8) and Mitchell Marsh (0) lost their wickets cheaply. Ravichandran Ashwin dismissed Warner and Marsh while Ravindra Jadeja sent Finch back to the pavilion, reducing Australia to 11/3 in the fourth over.

India had also beaten England in their earlier practice game and the Men in Blue will begin their campaign in a heavyweight clash against Pakistan on October 24.