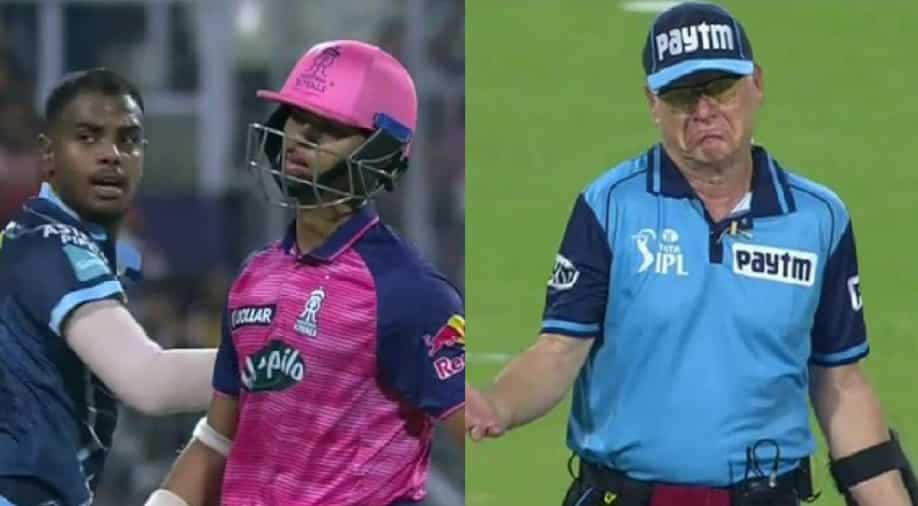 Yashasvi Jaiswal decided to walk off despite being given not-out. Photograph:( Twitter )

Rajasthan Royals (RR) opener Yashasvi Jaiswal walked off the field despite being given not out by the on-field umpire after edging a delivery from Yash Dayal during his side's clash against Gujarat Titans in Qualifier 1 of IPL 2022.

Rajasthan Royals (RR) opener Yashasvi Jaiswal decided to walk off the pitch despite being given not out by the on-field umpire during his side's clash against Gujarat Titans (GT) in the 1st Qualifier of the ongoing Indian Premier League (IPL) 2022 on Tuesday (May 24). Jaiswal was lauded by many for his actions but his decision to walk out despite being given not out left on-field umpire Bruce Oxenford surprised.

Jaiswal failed to get Rajasthan Royals off to a good start in the all-important Qualifier 1 at the Eden Gardens in Kolkata after Hardik Pandya won the toss and invited the Royals to bat first in the game. Jaiswal was batting on just 3 off 8 balls when he edged a delivery from pacer Yash Dayal and was caught by GT wicket-keeper Wriddhiman Saha.

The incident happened in the second over of Rajasthan Royals' innings when Jaiswal was facing Dayal. He edged one to Saha but the on-field umpire Oxenford was not convinced with GT's appeal. However, Jaiswal started walking back without waiting for the umpire's decision leaving him surprised. Oxenford eventually had to raise his finger and adjudge Jaiswal out. The umpire's reaction went viral on social media.

After Jaiswal's departure, skipper Sanju Samson joined Jos Buttler in the middle and added 68 runs for the second wicket. Samson went berserk and played some sensational strokes en route to his quickfire off 47 off 26 balls while Buttler held back. After Samson's dismissal Buttler combined with Devdutt Padikkal (28) to add another crucial stand of 37 runs for the third wicket.

Also Read: Who will feature in IPL 2022 final? Former England spinner makes his pick among RR, LSG, GT and RCB

The England star shifted gears after Padikkal's departure and went after the GT bowlers. He smashed 12 fours and 2 sixes to notch up 89 off just 56 balls and powered Rajasthan Royals to a strong total of 188 runs on the board in the first Qualifier.

The winner of the first Qualifier between Gujarat Titans and Rajasthan Royals will secure a spot in the final of the tournament while the loser will get a second shot at making it to the summit clash. The loser will take on the winner of the Eliminator between RCB and Lucknow Super Giants.