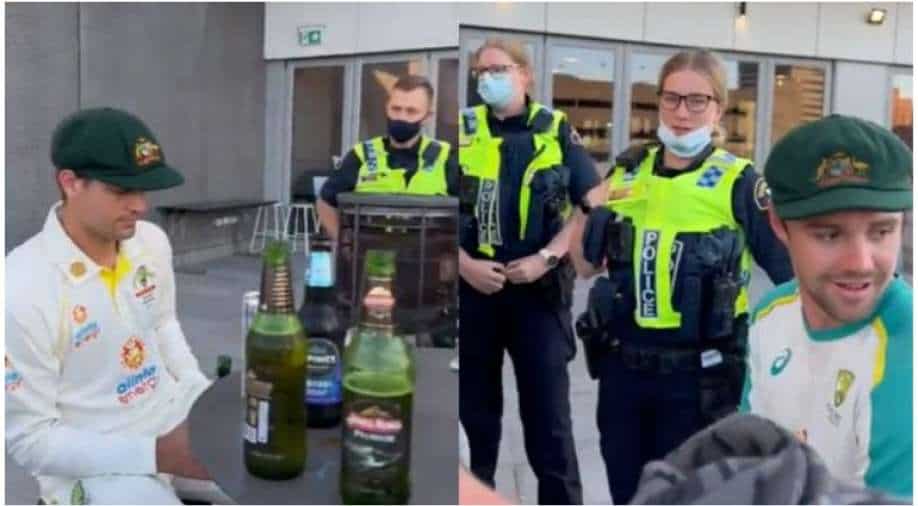 After the series ended, Aussie players such as Alex Carey, Player-of-the-Series Travis Head and Nathan Lyon were joined by England captain Root and experienced pacer James Anderson for some drinks. The players' celebrations were, however, interrupted by the police who ordered them to leave the brewery. Watch Video:

Pat Cummins-led Australia thrashed England by 146 runs in the fifth and final Ashes Test to claim the series 4-0. The Joe Root-led England's disastrous run in the Ashes 2021/22 edition finally ended, as the Three Lions remain winless Down Under since 2010-11.

With the series done and dusted, Cummins & Co. will look to carry on the momentum and go the distance in the ongoing ICC World Test Championship second cycle. On the other hand, Root-led England have plenty to ponder upon and need to revamp at the earliest in the red-ball format.

After the series ended, Aussie players such as Alex Carey, Player-of-the-Series Travis Head and Nathan Lyon were joined by England captain Root and experienced pacer James Anderson for some drinks. However, as the celebrations got 'too loud', the cricketers were reportedly thrown out of the Hobart brewery.

The players' celebrations were interrupted by the police, who had to intervene and ordered the cricketers to leave the brewery.

In a viral video, the four police officers identified the cricketers and could be heard saying, "Too loud. You have obviously been asked to pack up, so we’ve been asked to come. Time for bed. Thank you." However, no arrests were made.

Surely the Aust cricket team can have a beer? Whats with the police all of a sudden, in all states pic.twitter.com/4ITdJX3K0K

ALSO READ | 'Stuff of dreams': Pat Cummins on leading Australia to 4-0 win against England in Ashes 2021-22

After England's shambolic performance, Captain Root said at the post-match presentation, "It's been a frustrating tour, tough tour for us. We have to keep learning to get better. Not go away from here and keep making the same mistakes. Not long before we play Test cricket again and an opportunity to turn things around. It's pretty obvious we need to be putting more runs on the board. Too often we have not given our bowlers enough. We have been outplayed by Australia. Sometimes you have to put your hand up and say a team outplayed us."

On the other hand, Cummins stated, "Really is (stuff of dreams). Pretty crazy. To be at the end of a 5-match series with so many positives and 4-0, yeah really pumped. I am really happy as a captain, not sure if he is (smiles, on not having to bowl Lyon in the entire game). We have had some 15 players used in this series, some tough calls. Certainly feels like we are on to something big."

In the latest WTC points table, Australia are now in the second position -- behind Sri Lanka -- whereas England have slipped to the bottom.