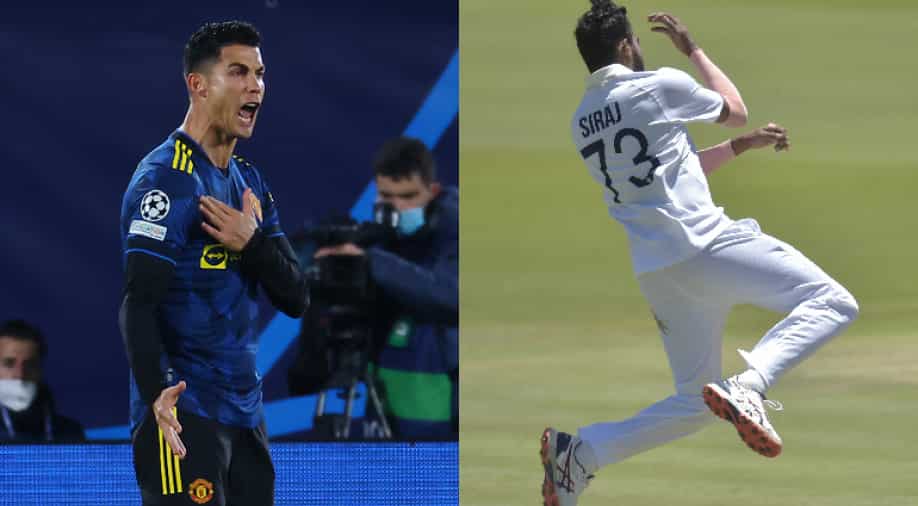 Indian pacers ran riot against South Africa in the first innings of the ongoing Boxing Day Test between the two sides in Centurion on Tuesday. After the second day's play was called off due to rain, India's batting unit collapsed in the first session on Day 3. Nonetheless, the visitors still managed to put on a strong total of 327 runs on the board.

The bowlers then wreaked havoc on South Africa to get the visitors off to a good start with the ball. The Indian pacers made South African batsmen dance to their tunes in the second session on Day 3. Jasprit Bumrah got India their first breakthrough by dismissing Dean Elgar cheaply on just 1 before Mohammed Shami removed Keegan Petersen and Aiden Markram in quick succession.

Mohammed Siraj then got the wicket of Rassie van der Dussen post lunch to open his account in the Centurion Test. Siraj got Van der Dussen caught at gully before pulling off Cristiano Ronaldo's iconic 'Siii' celebration. Siraj jumped in the air and did Ronaldo's celebration which caught the eyes of many on social media.

Manchester United superstar Ronaldo has been doing the popular celebration since his Real Madrid days and it is quite popular among football fans across the globe. Ronaldo is often spotted doing the same celebration after scoring a goal for United. While Siraj's attempt at copying the football legend was not perfect, it did impress fans.

Watch Siraj does a Ronaldo in Centurion Test:

South Africa were reduced to 32/4 after Van der Dussen's dismissal in the 13th over before Quinton de Kock (34) and Temba Bavuma helped the hosts recover with a 72-run stand for the fifth wicket. Bavuma then added 29 runs for the sixth wicket with Wiaan Mulder, who could only score 12 off 33 balls before being removed by Shami.

South Africa are in all sorts of trouble in the Boxing Day Test as they have already six wickets in their first innings and have less than 150 runs on the board.