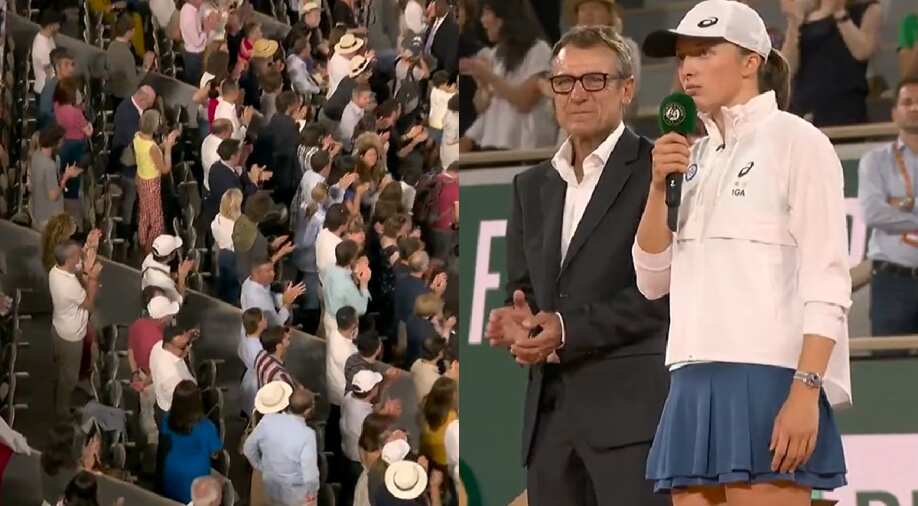 French Open champion Iga Swiatek received huge applause and a standing ovation from the crowd after talking about Ukraine in her title-winning speech.

Iga Swiatek continued her flawless run at the French Open 2022 on Saturday (May 04) as she defeated Coco Gauff in the final to be crowned as the Roland Garo champion for the second time in her career. It was a dominant performance from the Polish world number one, who demolished 18-year-old Gauff in straight sets to clinch the prestigious title at the Court Philippe Chatrier in Paris.

Swiatek wrapped up the game inside just 68 minutes to register an emphatic 6-1, 6-3 win over Gauff and extend her unbeaten run to a whopping 35 matches. The Polish star has now equalled Venus Williams' record for the longest winning run in women's tennis in the 21st century. She stands just one win away from surpassing Williams.

Following her incredible performance in the final, Swiatek won the hearts of the fans present at the Court Philippe Chatrier as she sent a strong message for Ukraine in her title-winning speech. The world no.1 urged Ukraine to stay strong amid the ongoing invasion of Russia and was applauded by fans present at the venue.

She also received a standing ovation from the supporters after her words on Ukraine. "I wanted to say something to Ukraine, to stay strong, because the war is still there," said Swiatek during her title-winning speech.

"Since I made my speech in Doha (after winning the tournament in February) it had started and I was hoping when I do the next tournament speech the situation will be better but I will still have hope," she added. Swiatek sported a ribbon with the Ukraine flag on her cap throughout the French Open this year.

It's your moment, @iga_swiatek #RolandGarros | pic.twitter.com/NwHIYnGK2L

Earlier this year, Swiatek had expressed her solidarity with the people of Ukraine after winning the Qatar Open title in Doha. She revealed watching pictures of the war from Ukraine had left her emotional and she couldn't imagine people suffering in the country next to her.

"I want to show my support to all the people who are suffering in Ukraine. Seeing those images is really emotional for me. I wouldn't even imagine stuff happening like that in the country next to me," Swiatek had said after winning her fourth career title in Doha.