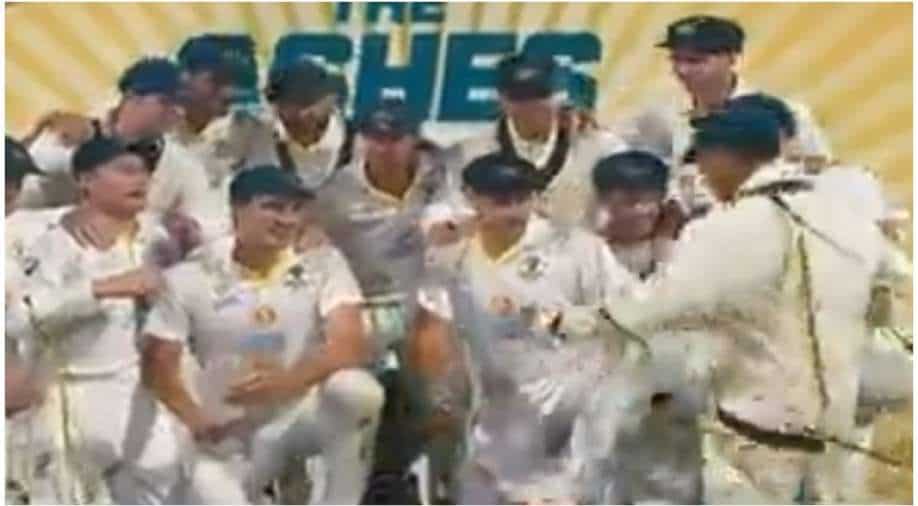 Ashes 2021/22: During the team picture of the victorious Pat Cummins-led Australian team, Captain Pat Cummins won hearts for his wonderful gesture for Usman Khawaja, stopping champagne popping for his inclusion.

Australia thumped England by 146 runs in the fifth and final Ashes Test of the 2021/22 edition, held Down Under, on Sunday (January 16). After Root & Co. had ensured to have prevented a whitewash, drawing the fourth and penultimate Test in Sydney, the visitors came to the series finale with an aim to sign off with a consolation win.

Opting to bowl first, England dismissed Australia for 303 -- thanks to Travis Head's 101 -- before the Three Lions bundled out for 188. Despite the Aussies managing only 155 in their second essay, Pat Cummins & Co. gave England a stiff 271-run target on Day 3 on Sunday. Root & Co. collapsed and were dismissed for 124 to lose the clash on the third day, in Hobart, by 146 runs.

Hence, Australia claimed the series 4-0 and went wild in their celebrations. During the team picture, after the post-match presentation at Bellerive Oval, Hobart, Usman Khawaja (who scored twin centuries in the fourth Test) had to move away from his teammates as they opened the champagne bottles. The Pakistani-born Aussie cricketer's religion prevents him from indulging in such celebrations. To this, Captain Cummins asked the team members to keep the champagne away for a bit to include Khawaja during the photo. Here's the video of Cummins' gesture for Khawaja:

ALSO READ | WATCH: Police intervene as Australia get 'too loud' during celebrations after thumping Ashes win

This might be a small gesture but this is what makes Pat Cummins great. He realised Khawaja had to dip because of the booze and rectifies it. pic.twitter.com/GNVsPGJhfK

ALSO READ | 'Stuff of dreams': Pat Cummins on leading Australia to 4-0 win against England in Ashes 2021-22

After the end of the series, Cummins stated at the post-match presentation, "Really is (stuff of dreams). Pretty crazy. To be at the end of a 5-match series with so many positives and 4-0, yeah really pumped. I am really happy as a captain, not sure if he is (smiles, on not having to bowl Lyon in the entire game). We have had some 15 players used in this series, some tough calls. Certainly feels like we are on to something big."

On the other hand, Captain Root opined on England's shambolic performance and said, "It's been a frustrating tour, tough tour for us. We have to keep learning to get better. Not go away from here and keep making the same mistakes. Not long before we play Test cricket again and an opportunity to turn things around. It's pretty obvious we need to be putting more runs on the board. Too often we have not given our bowlers enough. We have been outplayed by Australia. Sometimes you have to put your hand up and say a team outplayed us."