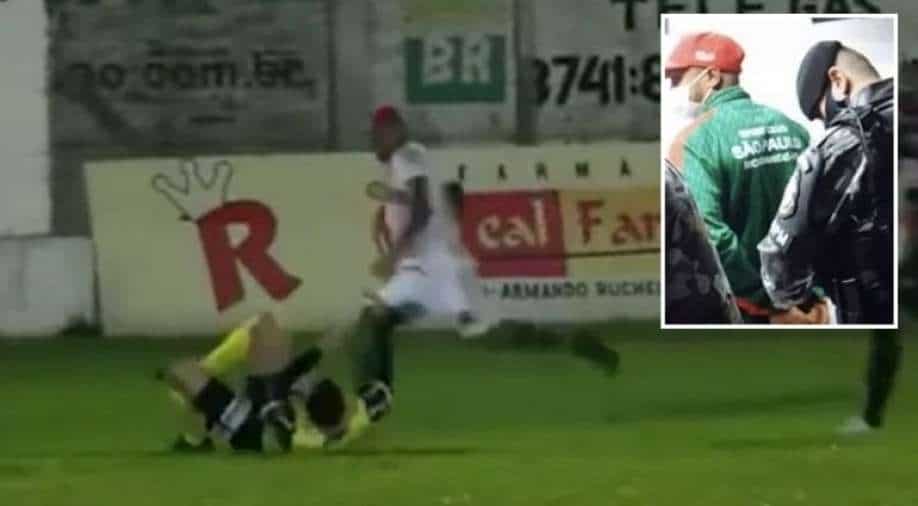 A Brazilian footballer has been charged with attempted murder for knocking a referee unconscious during a lower league game in the south of the country. During the second half of the match, William Ribeiro of Sport Club Sao Paulo, attacked the referee twice after he reportedly awarded a foul against the player during a league game away to Guarani on Monday (October 4).

The game was halted and the referee Rodrigo Crivellaro was taken to hospital. He was later released. "I decided... to charge the lad with attempted murder because in my perception of the case he took the risk of (inflicting) a lethal outcome," the officer in charge of the case told Brazilian portal UOL.

The club called the incident, that took place on Sport Club Sao Paulo's 113th anniversary, "one of the saddest in its history".

The horrific attack was captured by television cameras, with images showing players from both sides frantically waving on medical staff when the referee tumbled to the ground.

Shocking scenes in a Brazilian sixth tier match have resulted in Sao Paulo RS player William Ribeiro being arrested after physically attacking the referee for awarding a penalty against him. pic.twitter.com/KIfg1lvm2Q

Confirming that Ribeiro's contract has been terminated, Sao Paulo club president Deivid Goulart Pereira said in a statement, "Unfortunate, regrettable and above all revolting. On the exact day when all the red-green family gathered to celebrate the 113th anniversary of Sao Paulo RS, our club faced one of the saddest episodes of its history, a fateful scene that shocked all people who love not only Gaucho football but all those who just love the sport in general."

"We send all the apologies in the world to the injured referee and his family as well as apologising to the public in general for the lamentable scene seen today. The contract of the offending player is terminated. Furthermore, all possible legal measures in relation to the incident will be taken," the statement added.

After the incident, the match was suspended with around 35 minutes to go and was completed later on Tuesday.