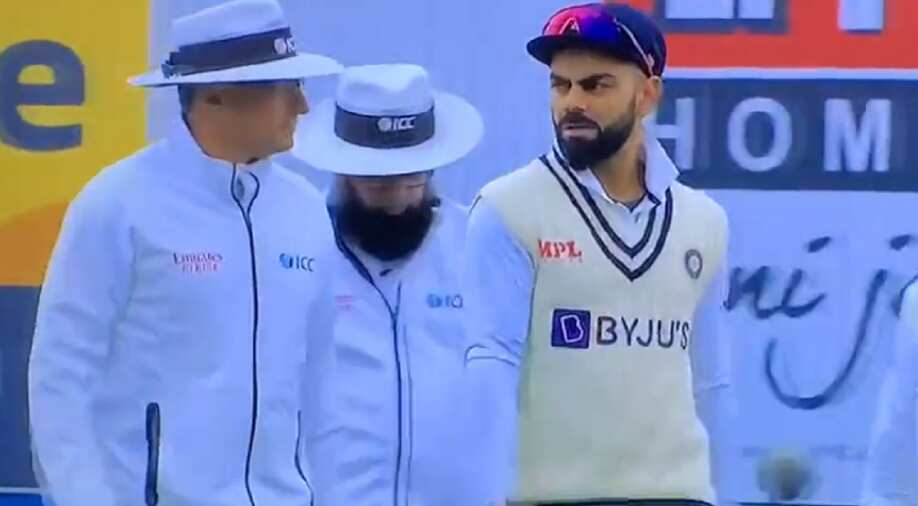 Virat Kohli was spotted arguing with the on-field umpires on Day 2 of Edgbaston Test. Photograph:( Twitter )

Virat Kohli was left miffed with the on-field umpire and was seen arguing with him after he stopped Mohammed Shami very late in his delivery stride during Day 2 of the ongoing Edgbaston Test between India and England.

Indian superstar Virat Kohli was spotted arguing with the on-field umpire after he stopped Mohammed Shami too late in his bowling stride during England's first innings on Day 2 of the ongoing rescheduled fifth Test between the two sides at Edgbaston in Birmingham. Despite having given up Test captaincy earlier this year, Kohli remains a leader in the squad and is often seen encouraging the players on the field.

The incident happened during the fourth over of England's first innings on Day 2 of the Test match when Indian pacer Mohammed Shami was bowling against Zak Crawley. Shami came steaming in for the first delivery of the over against Crawley but was stopped by on-field umpire Aleem Dar, who stuck his hand out signalling the bowler to stop.

However, the signal from the umpire came too late as Shami had already reached the crease by then and the ball was delivered to Crawley, who walked away from the stumps after noticing the umpire's signal. Kohli was not at all happy with the umpire's decision to stop Shami so late in his stride and was seen arguing with Dar.

Also Read: 'IPL was not on my mind': Jadeja opens up on making strong comeback for India after CSK controversy

"Ball ke beech mein kaise bol sakta hai? (How can he stop him in the middle of the delivery)" - Kohli was heard saying on the stump mic before he had a word with the umpire over his late call.

The late call from Dar came as the rain got heavier just before Shami bowled the delivery. Initially, the two on-field umpires had thought the play can be continued despite slight drizzle but square-leg umpire Richard Kettleborough then thought of stopping the play as the rain got slightly heavier.

Thus he signalled Dar, who was standing at the non-striker's end to stop the play but it was already too late as Shami came near the crease and delivered the ball before he could notice the umpire's signal. Kohli was not happy with the late call and was spotted having an animated discussion with the two umpires.

After posting a strong total of 416 runs on the board with the help of centuries from Rishabh Pant and Ravindra Jadeja along with a sensational cameo from Jasprit Bumrah, Indian bowlers managed to reduce England to 84/5 inside 27 overs on Day 2 of the Test match.