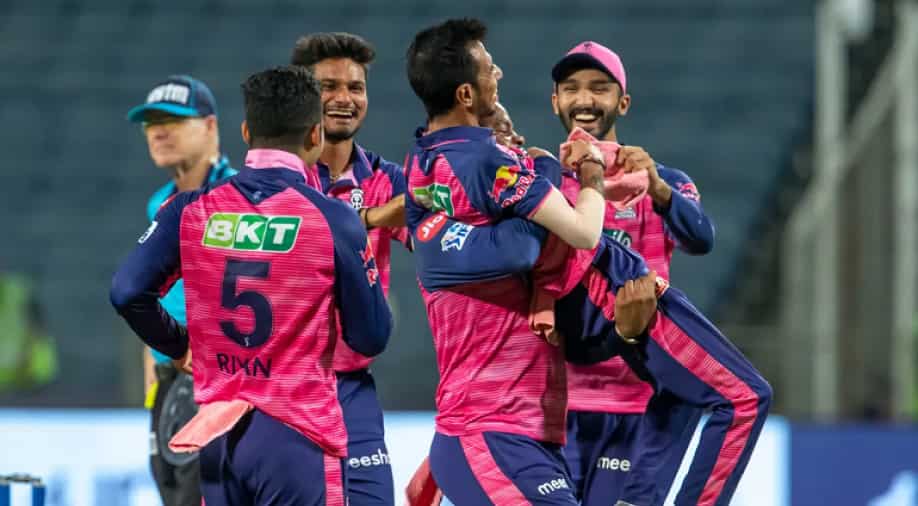 Sanju Samson-led Rajasthan Royals thrashed Royal Challengers Bangalore by 29 runs at the MCA Stadium in Pune on Tuesday. Here is a look at the updated points table after RR's win over RCB.

Sanju Samson-led Rajasthan Royals (RR) thrashed Royal Challengers Bangalore (RCB) by 29 runs in the ongoing Indian Premier League (IPL) 2022 on Tuesday to bag their third win on the trot. Young Riyan Parag turned out to be the hero with the bat for the Rajasthan Royals on a day when their top order failed to get going.

Asked to bat first by RCB skipper Faf du Plessis, RR got off to a poor start as they lost opener Devdutt Padikkal cheaply on 7 off 7 before R Ashwin surprisingly came out to bat at no.3. The spinner played some good shots to get to a quickfire 17 off 9 before being sent back by Mohammed Siraj.

In-form Jos Buttler also departed cheaply on just 8 off 9 balls leaving RR reeling on 33/3 inside the first five overs. Captain Sanju Samson helped steadied the ship with his 27 off 21 before Riyan Parag slammed a brilliant 56 off 31 balls to help RR post a fighting total of 144/8 in 20 overs.

After a gritty show with the bat, the RR bowlers produced a remarkable display with the ball as R Ashwin and Kuldeep Sen combined to run through the RCB batting line-up. While Sen picked up four wickets, Ashwin finished with a three-wicket haul to bundle out RCB for just 115 runs - the lowest total batting second this season.

With the win, Rajasthan Royals moved to the top spot on the points table. They now have 12 points from six wins in eight matches this season, RCB are at the fifth spot with ten points from nine games.

Despite being asked to chase a moderate total at the MCA Stadium in Pune on Tuesday, RCB's batting line-up faltered once again in the run-chase. Opening the innings with skipper Faf du Plessis, Virat Kohl was once again dismissed cheaply for 9 off 10 balls while Du Plessis could only manage 23 off 21 balls.

Dinesh Karthik (6) and Glenn Maxwell (0) also failed to deliver as RCB were skittled out for 115 runs by RR bowlers to suffer their second straight defeat in their last two games.