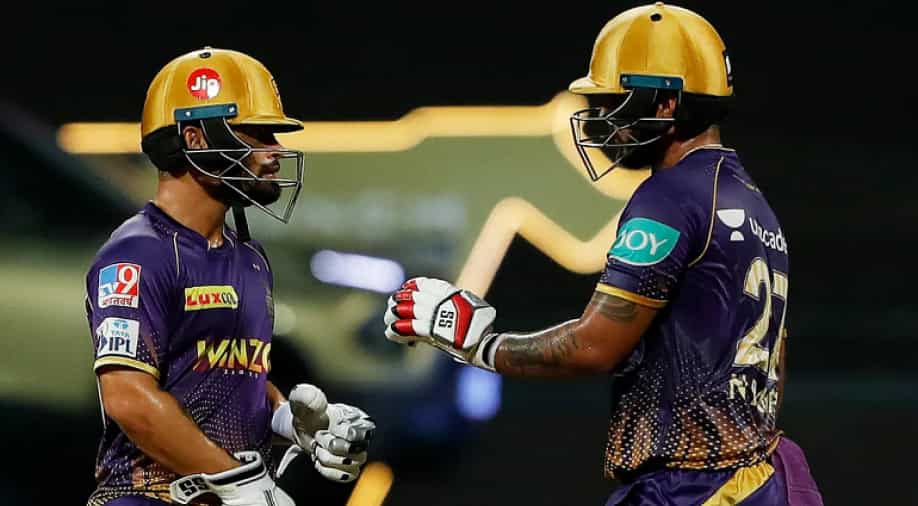 KKR beat RR by 7 wickets at the Wankhede Stadium in Mumbai on Monday. | Photo - IPL | Photograph:( Others )

Check out the updated IPL 2022 points table after Kolkata Knight Riders' 7-wicket win over Rajasthan Royals at the Wankhede Stadium in Mumbai on Monday.

Kolkata Knight Riders (KKR) brought an end to their five-match losing streak with a comfortable 7-wicket win against Rajasthan Royals (RR) at the Wankhede Stadium in the ongoing Indian Premier League (IPL) 2022 on Monday (April 02). Nitish Rana and Rinku Singh turned out to be heroes with the bat for KKR as the duo played sensational cameos to take their team over the line in a tricky run chase.

Asked to chase down a target of 153 runs, KKR opened with a new pair of Aaron Finch and Baba Inrajith at the top after Venkatesh Iyer was dropped from the playing XI following a string of low-key scores. KKR got off to a poor start as they lost both Finch (4) and Indrajith (15) cheaply before skipper Shreyas Iyer steadied the ship with Nitish Rana.

Iyer scored 34 off 32 balls before being removed by Trent Boult. However, Rana remained unbeaten on 48 off 37 balls and took the team over the line along with young Rinku Singh, who played a brilliant cameo of 23-ball 42 laced with six fours and a solitary six.

KKR won the toss and opted to bowl first in the game. With no Varun Chakaravarthy in the line-up, KKR bowlers were under pressure against an in-form RR batting line-up. However, some terrific bowling from Anukul Roy, Umesh Yadav and Tim Southee helped Shreyas Iyer & Co. restrict RR to 152.

Rana and Rinku played unbeaten knocks for KKR to help them chase down the target with five balls to spare and bring an end to their losing streak of five matches.