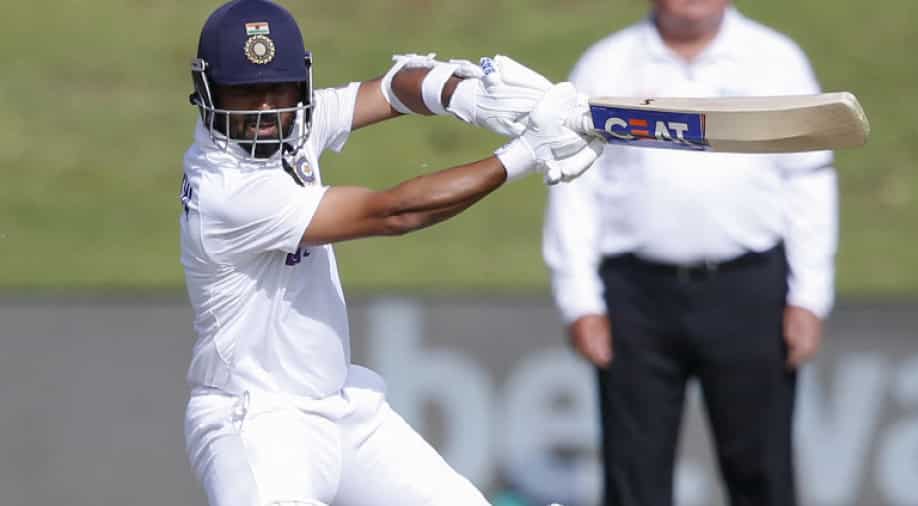 Ajinkya Rahane was seen constantly reminding himself to 'watch the ball' while batting. Photograph:( AFP )

Senior India batter Ajinkya Rahane was seen constantly telling himself to 'watch the ball' while batting out in the middle in the ongoing Boxing Day Test against South Africa in Centurion.

Ajinkya Rahane has been enduring a lean patch in his Test career of late as he has failed to score runs consistently for Team India. Rahane even lost his position as the vice-captain of the Test team ahead of the team's ongoing tour of South Africa as he was replaced by limited-overs captain Rohit Sharma. The under-fire senior batter has been under immense pressure to perform and the ongoing Test series against South Africa might be his final shot at redemption.

Rahane came out to bat at no.5 for India in their first innings of the Boxing Day Test at the SuperSport Park in Centurion on Sunday (December 26). He managed to keep his recent struggles behind and looked composed against the Proteas pacers as the right-hander scored an unbeaten 40 off 81 balls and posted an unbeaten stand of 73 runs with centurion KL Rahul to help India post a strong 272/3 at stumps.

It was a fine display from the under-fire batter, who has been on the receiving end of intense criticism due to his batting failures of late. While he looked focused, Rahane was spotted constantly telling himself to watch the ball while batting out in the middle in Centurion on Sunday.

'Watch the ball' - Rahane was heard murmuring to himself while batting during India's first innings. The video of the incident has gone viral on social media and has intrigued cricket fans.

Rahane reminding himself to watch the ball as the bowler runs up makes me realise how cruel cricket can be for such experienced guy pic.twitter.com/3HKhVgMMFc

Not many had expected India to include Rahane in the playing XI for the series-opener against South Africa in Centurion considering his recent struggles. However, captain Virat Kohli and head coach have put their faith in the senior batter, who has a great record in South Africa.

Rahane will be hoping to make the most of the good start he made on Day 1 of the Boxing Day Test and notch up a big score to help India cross the 400-run mark in their first innings. India are currently in a strong position in the game and will be looking to post a big total on the board to take a step towards victory in the series-opener.