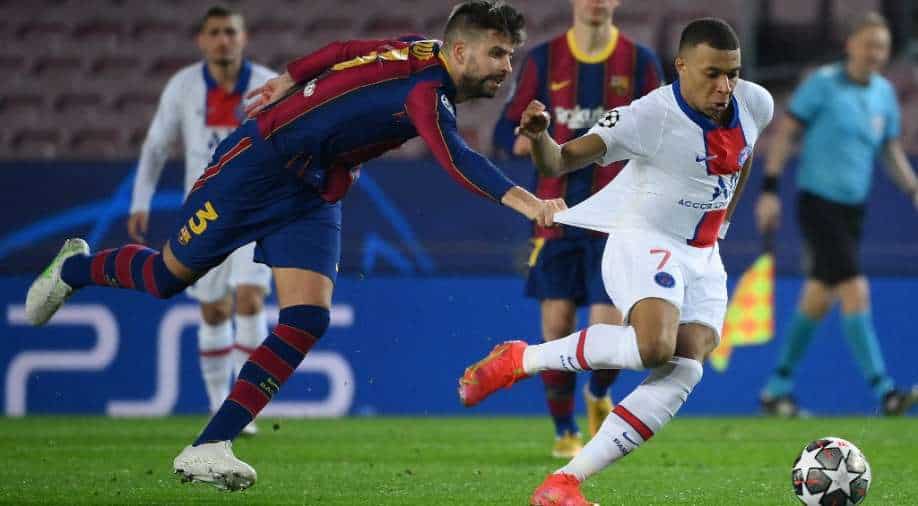 In the 65th minute, Mbappe scored his second goal, taking the club ahead in the match for the first time. Moise Kean extended the lead by scoring in the 70th minute.

Kylian Mbappe's hattrick helped Paris Saint Germain thrash Barcelona 4-1 in the first leg of Champions League last-16 on Tuesday. The massive away win for the French team have brought them very close to the quarter-finals of the tournament.

ALSO READ: David Alaba confirms he will leave Bayern Munich at the end of season

Barcelona captain Lionel Messi put the Catalan giants in front after scoring a penalty in the first half of the match, however, French striker Kylian Mbappe scored an equaliser with a classy piece of control and finishing to complete a flowing team move also involving Marco Verratti and Layvin Kurzawa, ending his goalless streak in tournament's knockout rounds.

In the 65th minute, Mbappe scored his second goal, taking the club ahead in the match for the first time. Moise Kean extended the lead by scoring in the 70th minute.

Mbappe completed his treble in the 85th minute by curling the ball past the German into the top corner.

His coach Mauricio Pochettino praised the striker and said he is happy at the club.

"He is top class, a great player and he is happy in our club," he said.

"Kylian felt calm before the game. During yesterday's training session he asked me "how many times have you won at Camp Nou?" I replied in Spanish that just one and he said "well tomorrow you are going to win the second time" and now after the game, we met at the pitch and he said "I told you that you was going to win your second match, you have won your second time here," Pochettino added.

Barcelona coach Ronald Koeman was left "disappointed" after the result and said that the team was lacking a lot of things.

He said: "I'm going back home sad and disappointed above all due to the differences in the second half but I have said a few times that we are lacking a lot of things, especially for the level you need in the Champions League. This doesn't mean that we aren't in the right path but we have to be realistic because the team is changing. In many positions the squad is very young and we are missing important players and we were unable to stop them in the second half. We have to accept that, analyze it and improve."