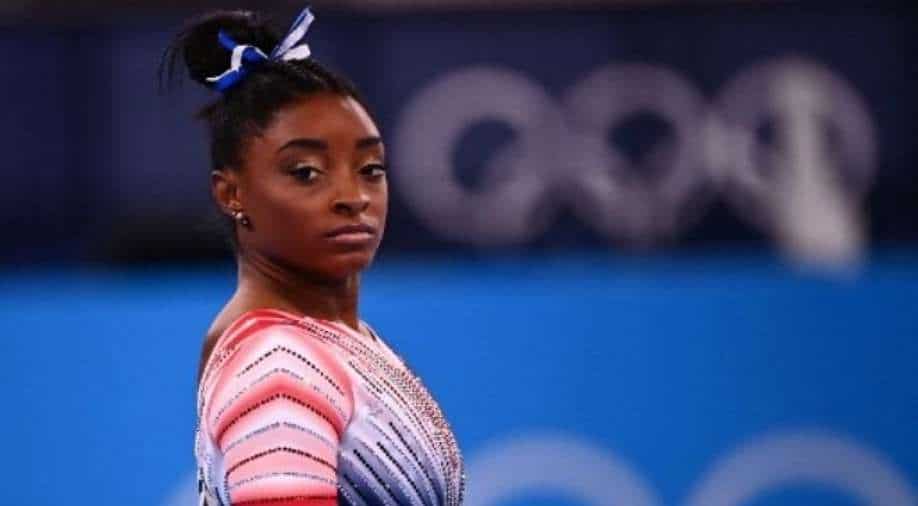 Simone Biles' nightmare Olympics concluded with the US gymnastics superstar returning in the beam final on Tuesday, declaring "I did it for me" after taking bronze behind Chinese teenager Guan Chenchen.

It was Biles' first taste of competition in Tokyo since dramatically standing down during the women's team final last week, struggling with the "twisties", a condition meaning gymnasts lose the ability to orientate themselves in mid-air.

"I was just happy to be able to perform regardless of the outcome.

"I wasn't expecting to walk away with the medal, I was just doing this for me," said Biles, who revealed her aunt died two days ago. I did this for me and me only. I just went out there and had fun."

After also withdrawing from the first three apparatus finals in the uneven bars, vault and floor, she said she had only been cleared to compete in the beam on Monday night.

"We almost missed the deadline!" she disclosed, adding: "Just to have one more opportunity to compete at the Olympic Games meant the world.

"Training for five years and then coming here, and then kind of being triggered and not being able to do anything, it wasn't fun."

Making history. Always. @Simone_Biles ties the record for the most Olympic medals won by a U.S. gymnast. #TokyoOlympics pic.twitter.com/4lXZ6waUeQ

The four-time gold medallist from the Rio Games received a huge cheer from her US teammates when she entered the arena.

With bib 392 on her back, she filed in with the other eight finalists, blowing a kiss to the cameras.

Another cheer rang out when the stadium announcer said: "And now, representing the United States...Simone Biles."

She looked pensive on her comeback as she waited for her turn to climb up onto the 10cm wide beam for one of the most intensely scrutinised 90-second routines of her or anyone else's life.

Among the audience for the 19-time world champion's heart-warming return to the field of battle at the Ariake Gymnastics Centre was Olympic chief Thomas Bach and two canine cardboard cutouts of her beloved French bulldogs -- Lilo and Rambo.

Peeling off her Team USA red tracksuit, she practised her dance moves in her star-spangled banner leotard as she waited for her turn as the third to perform.

Wiping her brow, she approached the beam, chalked up, and finally got the wheels back on her derailed Olympic campaign.

While avoiding any twists incorporated in her favoured and most difficult moves, she put in a solid performance, ending with a double backward somersault, double pike dismount.

Her face breaking into a broad grin, she waved and hugged rivals and team officials, the relief of having performed clear on her face.

Her routine earned the triple world champion on the apparatus 14.000 points.

"I was a little bit nervous for the dismount just because we had to switch it and I probably haven't done a double pike dismount since I was 12 years old, so it was kind of hard to control that," said Biles.

"But to go out there and compete one more time and have everybody's support meant the world."

She was lying second behind Tang Xijing until 16-year-old Guan, the last of the eight finalists to go, put in a superb display to take gold with 14.633 points, relegating Biles to bronze, the same colour she won in Rio.

Bach was one of the first to congratulate her on her comeback, as were 'Lilo' and 'Rambo' in their mute manner from the stands, after her Tokyo nightmare ended in smiles on the third rung of the beam podium.

She had arrived as one of the faces of the pandemic-delayed Games, seeking five gold medals to equal the Olympic all-time gymnastics record of nine.

But despite her hiatus she said she was proud of the decisions she had taken.

"My mental and physical health is above all medals that I could ever win."