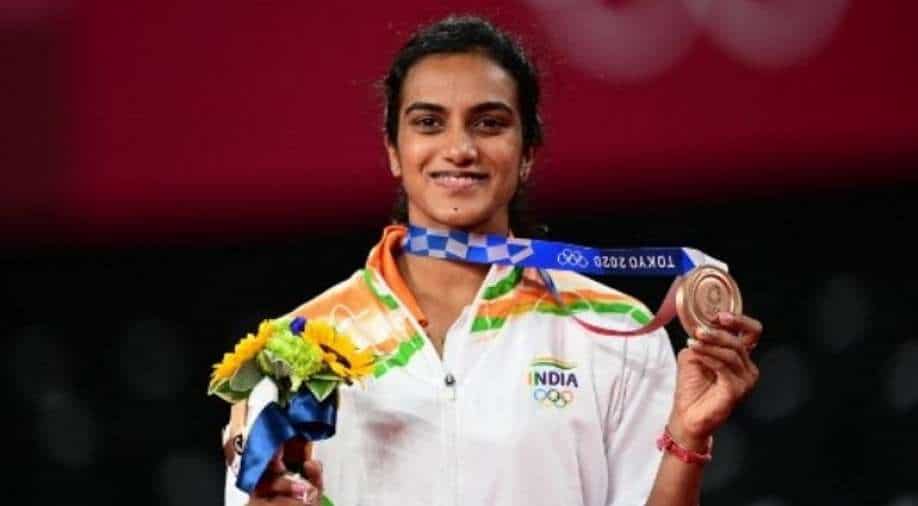 "I knew the difference between the third position and fourth position and winning a medal for the country was important for me, PV Sindhu said during an exclusive chat with WION.

Badminton star PV Sindhu, who became the first Indian woman athlete to win two individual Olympic medals, spoke exclusively to WION's Digvijay Singh Deo. She said that winning the elusive medal for the country was important for her. In the third-place match, the 26-year-old dismissed China's He Bing jiao 21-13, 21-15 to add a bronze to Rio 2016 silver.

"I knew the difference between the third position and fourth position and winning a medal for the country was important for me," she said during the exclusive chat.

During her outstanding Tokyo run, apart from the semi-final against Tai Tzu Ying of Chinese Taipei, Sindhu performed consistently well as she didn't drop a single game in her five wins.

On her bronze-medal match, she said, "It makes me feel really happy. I had a lot of emotions going through me but my coach [Park Tae-Sang] motivated me. I told myself that need to get this medal for my country and need to play for myself."

Sindhu bagged the third medal for India at the Tokyo Olympics as she overcame the fighting abilities of China's Bing jiao to join Mirabai Chanu (silver) and Lovlina Borgohain (bronze medal assured) with an outstanding performance at the Musashino Forest Sport Plaza court 1.

Sindhu also praised the performance of women at the Tokyo Olympics, she said, "It's really good women are doing really well in sports. We should take a step forward and say we are strong. We should be able to face anyone."

On being asked, how her win will motivate others, Sindhu said, "The medal will motivate youngsters. A lot of people will take up the sport and work hard. Hard work is the key to success. And also you need to have passion. End of the day hard work brings success, you need to know what's your passion."

The ace shuttler also spoke about how the Coronavirus (COVID-19) pandemic impacted her preparations as she said that the extra time helped her in honing her skills. She said, "During the COVID-19 pandemic, the government supported us and we got facilities. But during the gap, I utilised the time and worked on my skills and technique. Playing without the fans was not easy but I got used to it as I have been playing since January like this."

#Exclusive | "Compare to 2016, this was very different. This time it was lot of pressure and responsibility. I am very thankful to my coach. My coach was dedicated to me every single day", says @Pvsindhu1 in a chat with @DiggySinghDeo #Tokyo2020 #PVSinduToWION #PVSindhu pic.twitter.com/UpqMP7D935

PV Sindhu shared words of encouragement to other athletes at Tokyo Olympics as she asked them to "take positives and don't be disheartened".

Finally, on the famous ice cream joke, she said, "Not just ice cream, I want to do a lot more. I want to spend time with my family. Maybe go on a holiday. And just relax for a while."