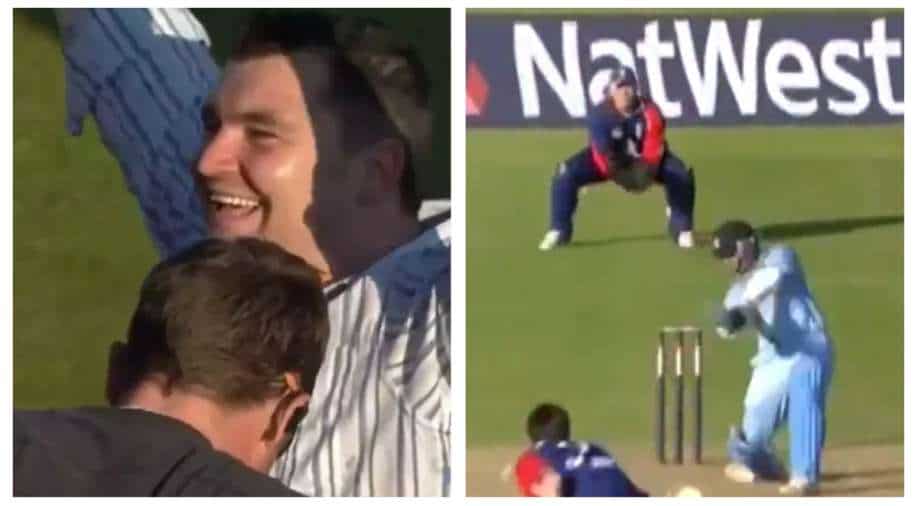 In the second ODI of the seven-match series between India and England, in 2007, the then captain Rahul Dravid smashed James Anderson for an impressive flat six, destroying a fan's beer pint. Here's the video:

During the ongoing second and penultimate Test between England and New Zealand, at Trent Bridge, Nottingham, Daryl Mitchell made heads turn with his six hitting a spectator's beer glass. For the unversed, this isn't the first time that such an incident took place as India's current head coach Rahul Dravid had once famously destroyed a fan's beer pint.

In the second ODI of the seven-match series between India and England, at County Ground, Bristol, the then captain Dravid smashed James Anderson for an impressive flat six. In what turned out to be a hilarious incident, the ball went onto destroy a spectator's beer pint while the commentators praised the fabulous shot but also took note of the funny episode that followed suit.

Here's the video of Dravid's flat six which led to a fan's beer pint being destroyed:

Since the video of Daryl Mitchell destroying a cricket fan's beer pint is going viral, here's Rahul Dravid doing it with a flat six.pic.twitter.com/vL37u8KSzN

Talking about the India-England second ODI, Dravid's 63-ball 92 and Sachin Tendulkar's 99 took India to a mammoth 329/7 in 50 overs, after opting to bat first. In reply, Paul Collingwood-led England gave a tough fight with fifties from Ian Bell and Dimitri Mascarenhas, along with starts from other batters, but were restricted for 320 for 8, with Piyush Chawla and Munaf Patel chipping in with three wickets apiece.

Coming to the England-New Zealand ongoing second Test, Kane Williamson-less Kiwis were 318 for 4 at stumps on the opening day of the match with unbeaten fifties from Mitchell and Tom Blundell.

Indian head coach Dravid, on the other hand, is involved in the Men in Blue's home T20Is versus South Africa.