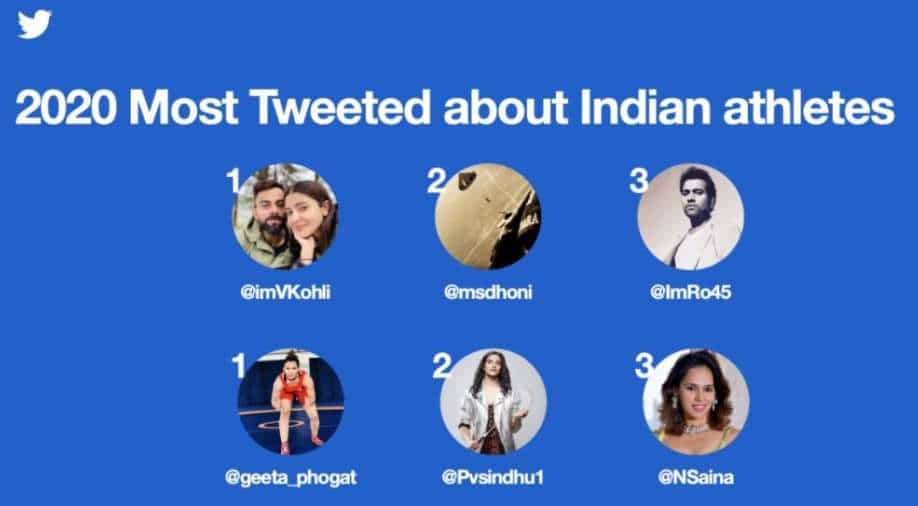 The year 2020 has been like no other. Even though everyone stayed home and stayed safe, the spirit of sports lovers on Twitter was alive and well. People tuned into the timeline to enhance their viewing experience and feel more connected to the game.

The year 2020 has been like no other. Even though everyone stayed home and stayed safe, the spirit of sports lovers on Twitter was alive and well. People tuned into the timeline to enhance their viewing experience and feel more connected to the game. Fans and athletes stayed away from the stadium and used Twitter to stay connected with each other, sharing fitness routines, DIY activities and having conversations through Twitter Q&As.

Here is a look at the Top Sports Tweets of 2020 that struck a chord with Indians and became the most Retweeted and Liked Tweets this year.

(Identified based on the total number of Retweets / Likes by Twitter accounts in India between Jan 1 to Nov 15, 2020.)

An Artist,Soldier and Sportsperson what they crave for is appreciation, that their hard work and sacrifice is getting noticed and appreciated by everyone.thanks PM @narendramodi for your appreciation and good wishes. pic.twitter.com/T0naCT7mO7

Former Team India skipper M.S Dhoni shared his gratitude on Twitter, thanking Prime Minister Modi for sending him a letter that acknowledged his deep contribution to cricket in India. The Tweet was met with a tremendous roar of approval across the nation making it the most Retweeted Tweet by an athlete.

Most Liked & Quote Tweeted Tweet: Virat Kohli Tweeted about Anushka Sharma’s pregnancy, sharing his joy and happiness with billions on the service.

Virat Kohli’s Tweet that announced Anushka Sharma’s pregnancy became the ‘Most Liked and Quote Tweeted Tweet of 2020’ for sports as people across India shared their love and good wishes with the couple.

1.#IPL2020: Twitter was abuzz with Tweets across the 13th edition of the Indian Premier League (IPL) as the much-anticipated T20 cricket tournament took place later in the year than usual. Cricket enthusiasts celebrated and connected with each other on Twitter, making #IPL2020 the most Tweeted hashtag in sports for 2020.

2.#WhistlePodu: The MS Dhoni-led team Chennai Super Kings became the most Tweeted about team in #IPL2020, and subsequently their team hashtag #WhistlePodu became the second-most Tweeted hashtag in sports this year.

3.#TeamIndia: At the start of the year, the stellar performance of the Indian Women’s cricket team at the ICC Women’s T20 World Cup created cheerful conversations and translated into strong momentum on and off the field. 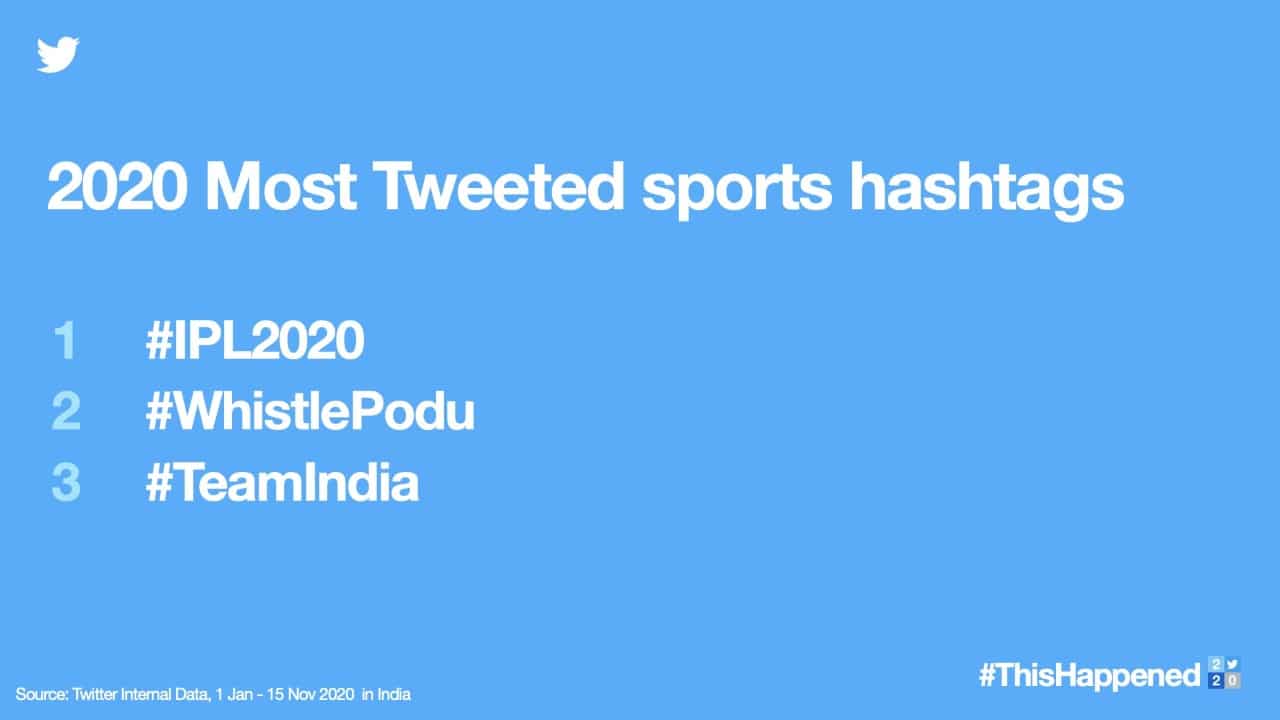 #ThisHappened: Most mentioned Indian athletes in 2020

The most Tweeted about Indian athletes on Twitter was cricketer, and captain of Team India, Virat Kohli , followed by two other cricket icons MS Dhoni and Rohit Sharma.

While cricketers dominated the male charts, it was our Olympian stars which made it to the top of the most mentioned female athletes on Twitter in India in 2020. Indian wrestler, who is in the race for Tokyo Olympics, Geeta Phogat was the most mentioned Indian woman athlete on Twitter followed by India’s Badminton stars PV Sindhu and Saina Nehwal. 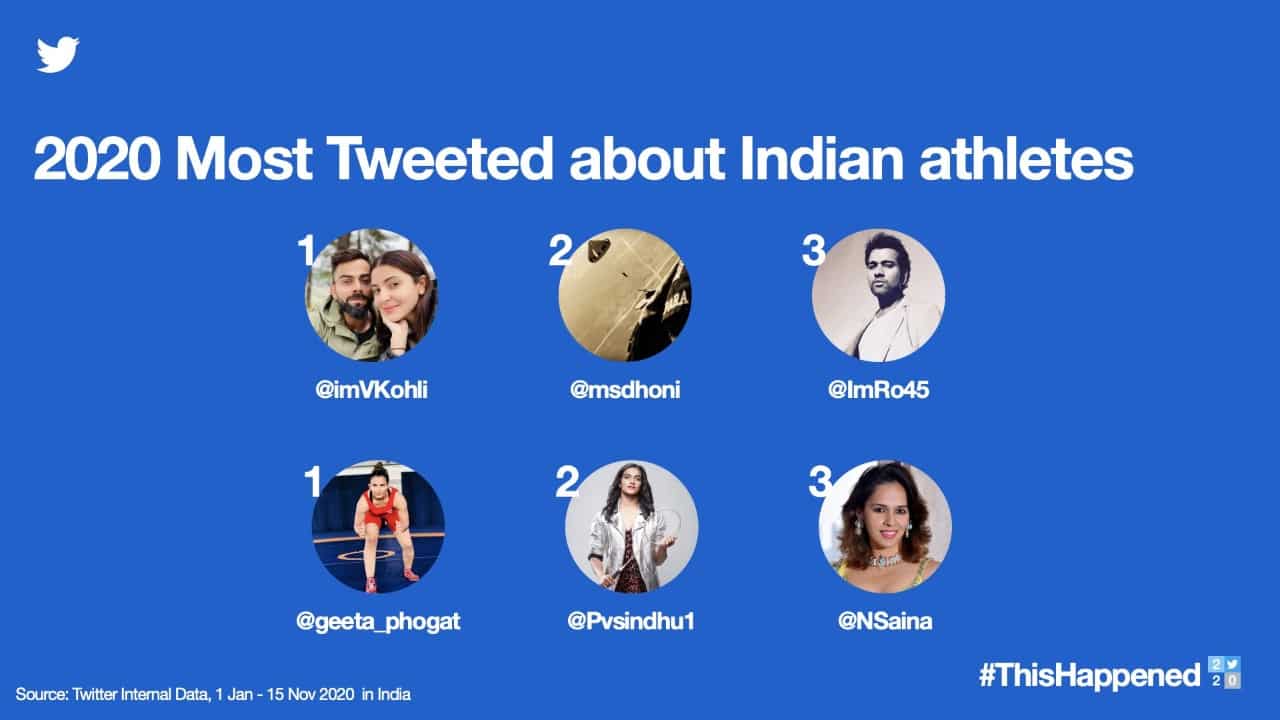 #ThisHappened: Most Tweeted about sports other than Cricket in India

India is a cricketing nation, and Twitter is where that cricket action unfolds -- but there are many other sports that fill Indian timelines too. One of the most followed sports after cricket in India is football, and so unsurprisingly this became the most Tweeted about sport (other than cricket) on Twitter this year. Basketball (NBA) and F1 Racing were the other two sports which were discussed the most by Indian fans in 2020. 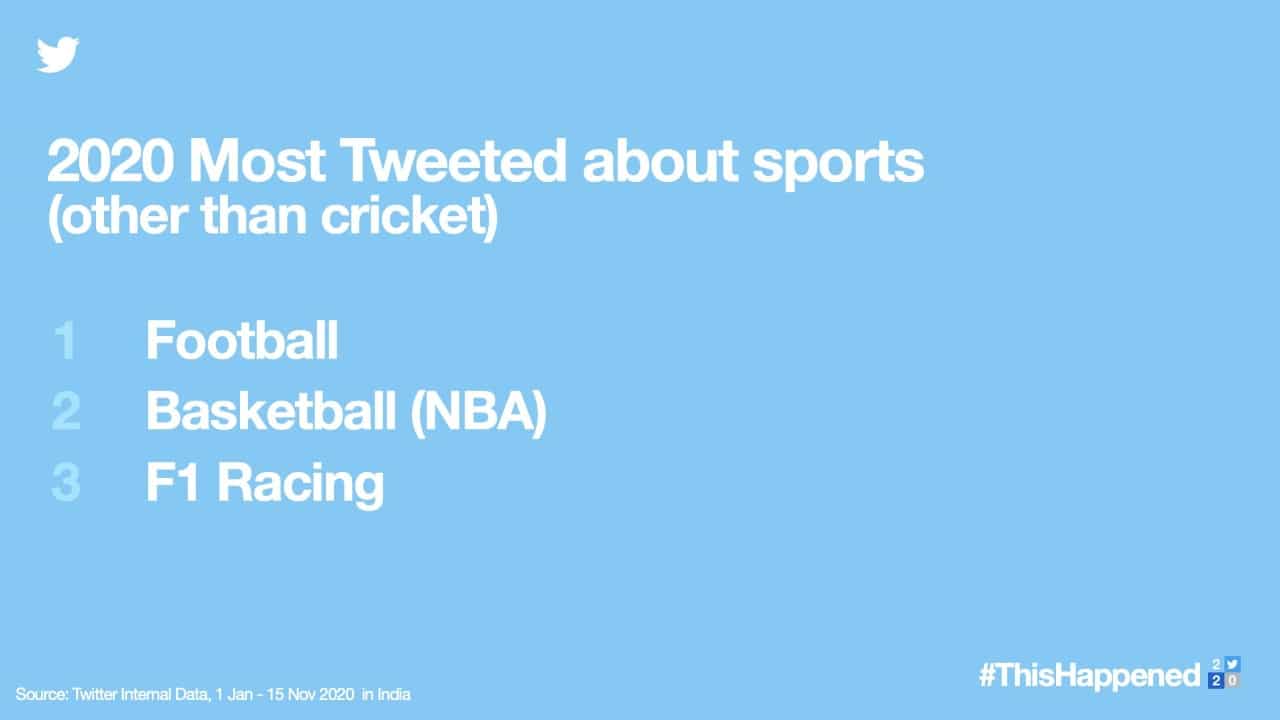 Here is the list of top three most Tweeted about global sports teams and global athletes in India this year:

#ThisHappened: Most Tweeted about global sports personalities in India