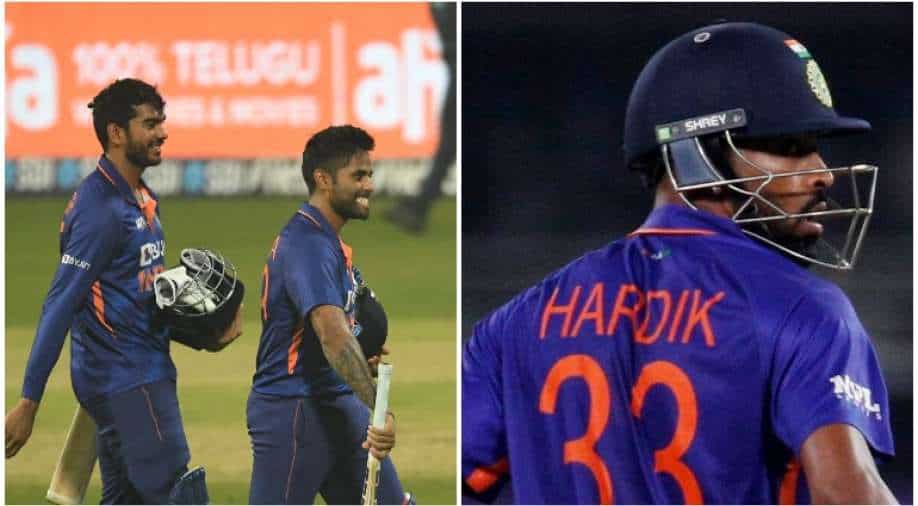 "If Hardik bowls, he will pip Venky Iyer for all-rounder's slot for T20 WC" Photograph:( Agencies )

Former Indian opener Aakash Chopra feels Hardik Pandya will edge past Venkatesh Iyer for the all-rounder's slot for the T20 World Cup as soon as he starts bowling and regains full fitness.

Hardik Pandya has been out of action since the 2021 T20 World Cup, held in the UAE. Since then, the 28-year-old all-rounder is out of contention and is striving hard to regain full fitness to reclaim the all-rounder's slot in Team India setup across formats.

Hardik will next be seen in action during the forthcoming Indian Premier League (IPL) 2022 edition, where he will represent the Gujarat Titans (GT). The swashbuckling all-rounder will represent his home franchise as the captain. Along with showcasing his skills as captain, Hardik will be eager to don the all-rounder's role and perform with aplomb for a comeback into the national side. For now, he was been replaced by Venkatesh Iyer in the white-ball formats. Iyer has also grown as a T20I player over the past month and is doing the right things so far to make it to the 2022 T20 WC squad.

Nonetheless, former Indian opener-turned-commentator Aakash Chopra feels Hardik still has the upper hand and will pip Venky Iyer for the fast-bowling all-rounder's slot, for the T20 WC, once he starts bowling and regains full fitness.

“It may look like Venkatesh Iyer is ahead in the race, but I won't be surprised if Hardik Pandya wins it. Ravindra Jadeja will be the spin all-rounder and Pandya will be the fast-bowling all-rounder,” Aakash said on his official YouTube channel.

“Iyer is present for now but the day Hardik starts bowling, he will pip Venkatesh Iyer for the role. It is also worth remembering that it is not a bilateral series where you can take 18-20 players at once according to your convenience. This is an ICC event where you can select only a 15-member squad," the ex-cricketer pointed out.

The former India batter further stated that the Kolkata Knight Riders (KKR) opener Venky Iyer will only have an outside chance if Hardik doesn't regain full fitness.

“So, when you only have 15 places, you cannot take everything with you. So, you will only have two options for the all-rounder position and for me, they would be Ravindra Jadeja and Hardik Pandya. Venkatesh Iyer may have a chance if Pandya isn't fit -- that can also happen but hopefully it doesn't,” said Aakash.