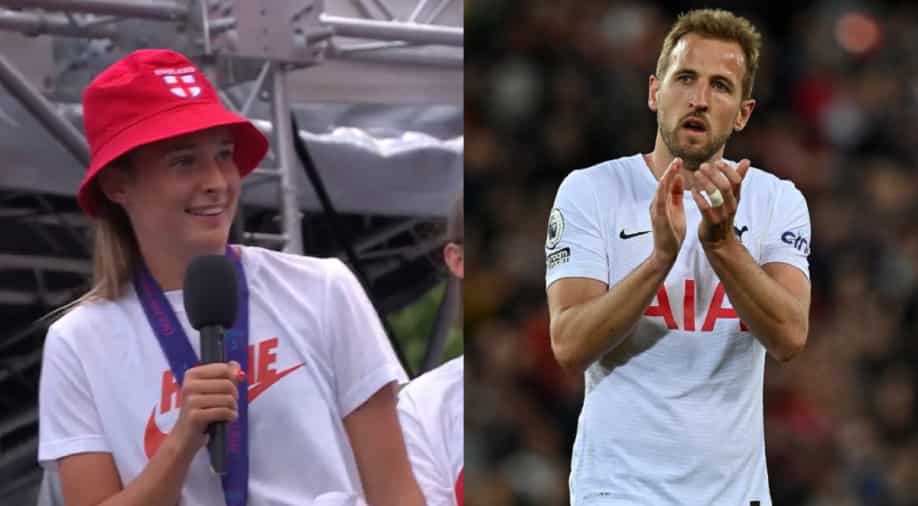 Ella Toone gave a hilarious response to Harry Kane's praise for her. | Photo - Twitter/AFP | Photograph:( Others )

England women's team star Ella Toone came up with a hilarious response when she was asked about the reaction to Harry Kane's praise for her after her goal in the Women's Euro 2022 final.

England women's football team scripted history at their home ground Wembley on Monday (August 01) as they went on to beat Germany in a thrilling final to lift their maiden Women's Euro title. Ella Toone and Chloe Kelly scored the goals for England as they beat Germany 2-1 at Wembley to clinch the country's first major trophy in international football since the men's team won the World Cup in 1966.

It was a sold-out crowd at Wembley which went berserk as Kelly scored the winner in the 110th minute to seal the trophy for England. It was an enthralling final between the two sides where both teams gave their all to come out on top but it was England, who got the better of Germany at the end.

After a goalless first half, England broke the deadlock in the second half when Elle Toone put them ahead with a brilliant strike in the 62nd minute. However, Lina Magull soon cancelled out England's lead as she scored the equaliser for Germany in the 79th minute to force the final into extra time where Kelly scored the winner and brought it home for England.

The England women's team stars celebrated with the fans during their victory party in London on Monday where Toone was asked for her reaction to England men's football team captain Harry Kane's praise for her. Toone, who plays for Manchester United women, came up with an epic response to leave everyone in splits.

Also Read: Proudest day of my life, until I have kids: England captain Leah Williamson reacts after Women's Euro triumph

"Absolutely unreal scenes at Wembley!! Massive congrats to the amazing @Lionesses !! @ellatoone99 take a bow for that finish too," England striker Kane had tweeted after England won the Women's Euro title.

Absolutely unreal scenes at Wembley!! Massive congrats to the amazing @Lionesses!! @ellatoone99 take a bow for that finish too

During their victory party, sports presenter Alex Scott mentioned Kane's tweet and asked Toone about her reaction. "Even Harry Kane was in awe of you last night, tweeting," she told the England women's team star. Toon had a tounge-in-cheek reply and responded - "Yeah I taught him that." The video of her hilarious reply has since gone viral on social media.

Alex: Even Harry Kane was in awe of you…

Toone: I taught him that

Toone also opened up on her brilliant opener in the final which gave England a much-needed lead against Germany. The Manchester United star said it felt like the ball took 10 minutes to sneak into the back of the net after she had dispatched it before the whole stadium erupted.

"I don't know. I don't know. It took about 10 minutes to go in the back of the net. Then I ran off and the whole stadium erupted and it was the best feeling in the world. So yeah, buzzing," said Toone.