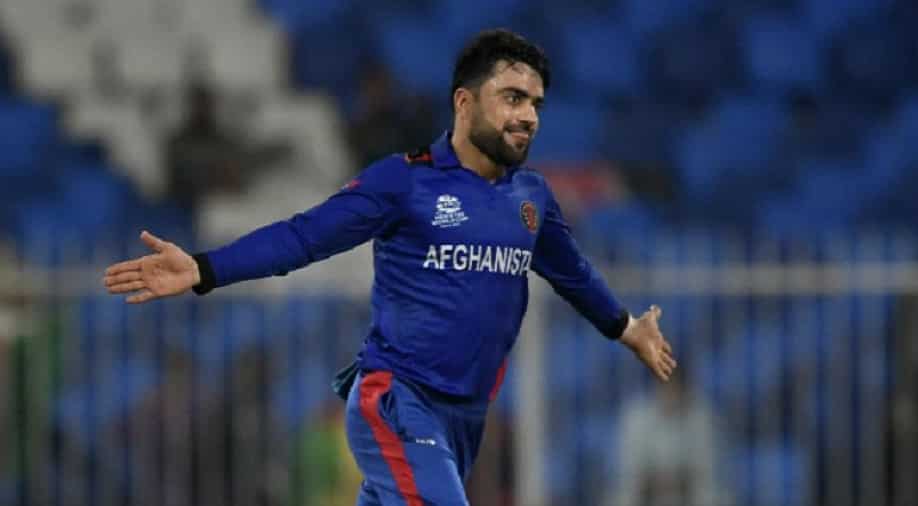 Rashid Khan has urged for peace ahead of Afghanistan-Pakistan game. Photograph:( AFP )

Afghanistan's star spinner Rashid Khan has sent out a message to the fans of the teams to maintain peace and decorum as they take on Pakistan in the T20 World Cup 2021 on Friday (October 29).

Afghanistan spinner Rashid Khan has sent out a message to the supporters of both countries ahead of his side's clash against Pakistan in the ongoing T20 World Cup 2021. Rashid has called for peace and decorum to be maintained during the game between the two sides in Dubai on Friday (October 29).

Pakistan will take on Afghanistan in their third Super 12 match in the T20 World Cup 2021 on Friday. Ahead of the game, Rashid recalled the clashes that broke out between the supporters of the two countries during their last meeting in the ICC ODI World Cup in 2019.

During that match, a scuffle had broken out between the fans of Afghanistan and Pakistan outside the Headingley Cricket Stadium in Leeds. The clashes happened after an aircraft was spotted flying above the stadium with the message - 'Justice for Balochistan'.

Some fans had also clashed inside the stadium and had to be evicted by the security later. Rashid has appealed for peace this time around and said a game should be taken as a game at the end of the day.

“After the 2019 World Cup match, whatever happened shouldn’t have happened. But this is the kind of request to all the fans, whatever there is that comes at the end, at the end of the day this game gives lots of unity to the nations and brings them together, not to have those kinds of accidents.

“Definitely it’s always a good game against Pakistan, even when we played in the 2018 in Asia (Cup). And also in terms of the 2019 World Cup. But this game should remain as a game. I think it’s a request to all the fans to stay cool and calm and just enjoy the game. This game is all about enjoyment.

“The more we just focus on the enjoyment, and as we have seen in this game, things happen, accidents happen. So I hope they remain cool and calm and just focus on enjoying the game and who plays better on the day that team wins,” he added.

Also Read: 'Who are they to off air me': Shoaib Akhtar slams Pakistan TV channel after spat with anchor on live show

Afghanistan defeated Scotland by a huge margin of 130 runs in their opening clash of the T20 World Cup and will be heading into the game against Pakistan on a confident note. Pakistan, on the other hand, have recorded back-to-back wins against favourites India and New Zealand to get off to a brilliant start in the tournament.

It remains to be seen if Afghanistan can halt Pakistan's winning streak in the tournament and make it two wins in a row in the Super 12 stage of the tournament.