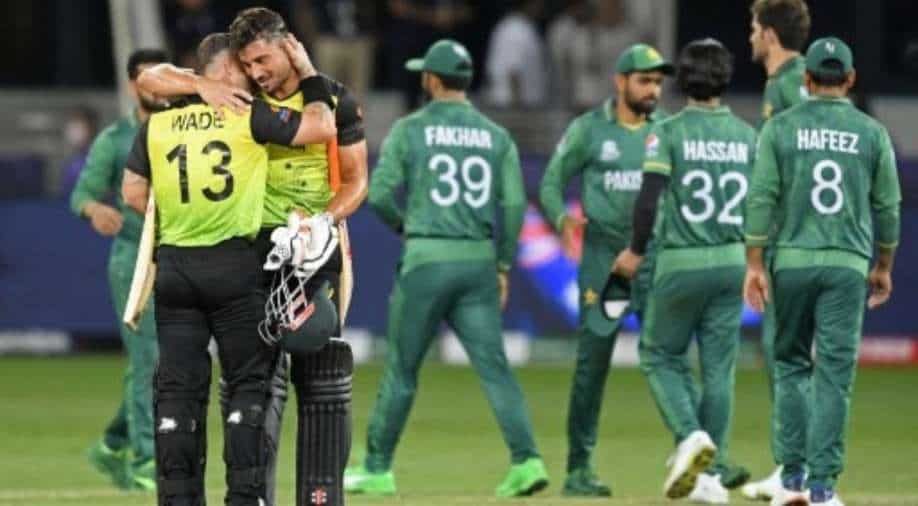 Chasing 177 for victory, Australia were in trouble at 96-5 when Stoinis (40) and Wade, who hit three successive sixes in his 41, put on 81 to finish off the match with one over to spare in Dubai. Wade, who was dropped by Hasan Ali on 21, smashed three straight sixes off Shaheen Shah Afridi in the 19th over to register the victory.

Australia suffered an early blow when Shaheen trapped skipper Aaron Finch lbw for nought. But David Warner's 49-run knock helped his side to bounce back in the game. He was caught behind off leg-spinner Shadab Khan who took four wickets. Warner was well-supported from one end by Mitchell Marsh (28 off 22).

But Shadab turned up the heat in the seventh over to get Marsh out. The leg-spinner struck in each of his four overs to claim the big wickets of Steve Smith, for five, Warner, and Glenn Maxwell, for seven as Australia lost half their side for 96.

After the match, the winning skipper Aaron Finch said, "Never thought it was in the bag. It was a great game of cricket. The way Wade held his nerve at the end was amazing. That partnership with Stoinis was crucial. I got my feet in a tangle and opening batsmen do get a few good balls now and then in T20 cricket."

"We were sloppy today in the field, a couple of tough ones. We need the support of all 17 players to get across the line. We have played some really good cricket in the back end. Teams chasing have been successful," he added.

Put in to bat, Pakistan got off to a strong start with Mohammad Rizwan (67) and skipper Babar Azam (39) forging a 71-run partnership for the opening wicket and helping their side post 176-4.