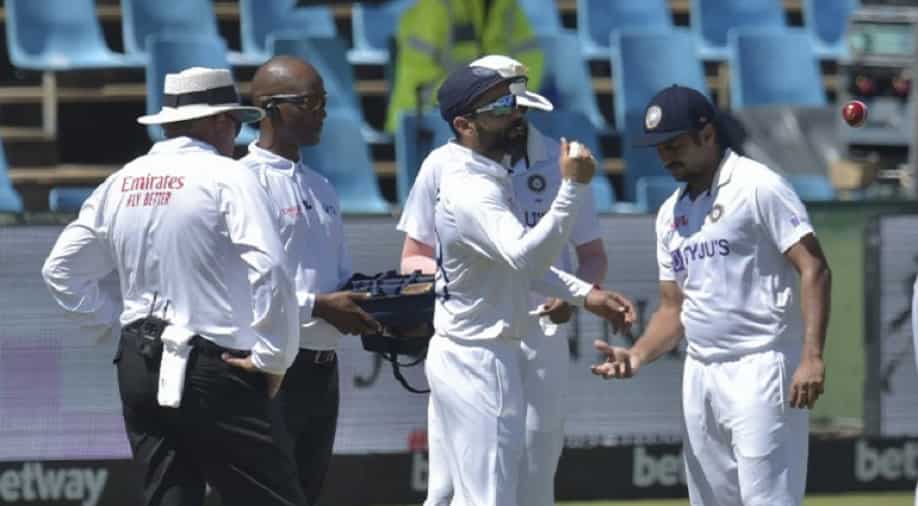 Virat Kohli and other Indian players had taken a dig at the host broadcaster during the 3rd Test. Photograph:( AFP )

SuperSport, the official broadcaster of the hosts in ongoing India's tour of South Africa, has responded after allegations of foul play from Indian players in the third Test.

South African broadcaster SuperSport has responded to the allegations of foul-play made by the Indian players during Day 3 of the recently-concluded third Test between the two sides at the Newlands Stadium in Cape Town. Indian players, including captain Virat Kohli, didn't shy away from venting out their frustration on the official broadcaster for the hosts after a controversial DRS call went South Africa's way on Day 3 of the Test match.

The incident happened during Day 3 when South Africa skipper Dean Elgar was trapped plumb lbw by R Ashwin. The on-field umpire raised his finger and deemed Elgar out. However, the SA captain went for a review and the DRS hawk-eyer showed the ball was going over the stumps despite the replays suggesting that the ball had hit him below his knee.

The hawk-eye tracker left Indian players baffled as Kohli and others were absolutely furious. Kohli was then seen walking towards the stump mic and taking a jibe at the host broadcaster SuperSport. “Focus on your team as well when they shine the ball eh, not just the opposition. Trying to catch people all the time,” Kohli was heard saying.

R Ashwin and KL Rahul also joined the bandwagon and alleged foul-play by taking a dig at SuperSport. “You have got to find better ways to win SuperSport,” Ashwin was caught saying on the stump-mic while Rahul said - “The whole country against us 11.”

Also Read: [VIDEO] 'You go after someone who is 5 years younger': Kohli gives it back to Van der Dussen in 3rd Test

SuperSport has now responded to the allegations and comments from the Indian players and said it has no control over the hawk-eye, which is an independent service provider and is approved by the International Cricket Council (ICC).

“SuperSport notes comments made by certain members of the Indian cricket team. Hawk-Eye is an independent service provider, approved by the ICC and their technology has been accepted for many years as an integral part of DRS,” the broadcaster said in a statement, as per AFP.

“SuperSport does not have any control over the Hawk-Eye technology,” the statement added.

South Africa denied India a historic win in the third Test as they chased down the target of 212 runs comfortably in the second innings in Cape Town. Keegan Petersen was the hero for the Proteas with a brilliant knock 82 runs in their second innings.

With the seven-wicket win, South Africa clinched the Test series 2-1 as India's wait for their maiden Test series win in the Rainbow nation was extended once again.