[VIDEO] 'You go after someone who is 5 years younger': Kohli gives it back to Van der Dussen in 3rd Test 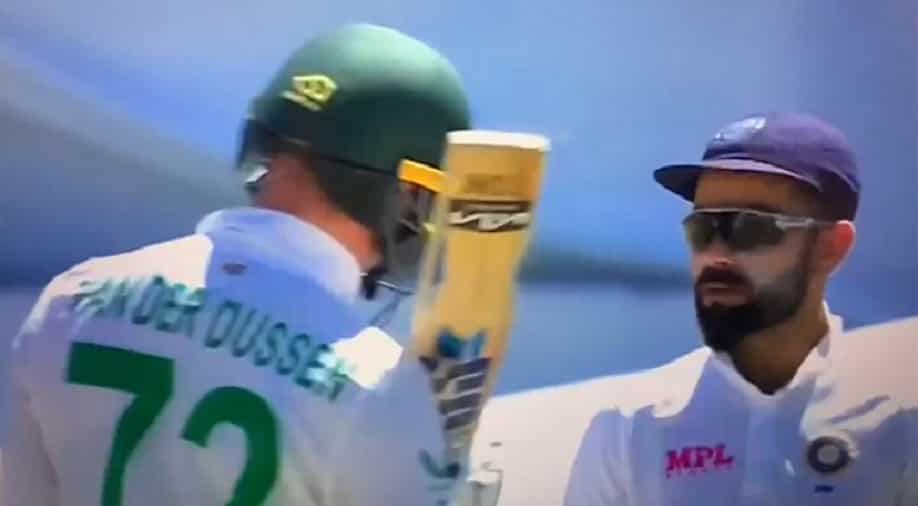 Indian captain Virat Kohli was seen giving it back to South Africa batter Rassie Van der Dussen after the latter tried to sledge Rishabh Pant during Day 3 of the third Test between India and South Africa.

Indian Test captain Virat Kohli didn't hold back as he went after the South Africa players once after another in the recently-concluded third and final Test between the two sides at the Newlands Stadium in Cape Town. South Africa won the match by seven wickets after comfortably chasing down the target of 212 runs with seven wickets to spare in their second innings on Day 4 (Friday).

While it proved to be an easy win for the hosts in the end, the game saw some heated moments between the players from both sides. Both the teams gave their all to come out on top and the players were involved in some fiery exchanges throughout the course of the Test match.

After venting out his frustration on the stump mic after Dean Elgar survived a controversial DRS call on Day 3, Kohli went after South Africa batter Rassie van der Dussen on Day 4 of the Test match. Kohli gave it back to Van der Dussen over his heated exchange with Rishabh Pant during India's second innings on Day 3.

The incident happened in the 37th over of South Africa's second innings when Mohammed Shami thought he had induced an edge of Van der Dussen's bat. India went for a review only to find out that his bat had hit the ground which caused the noise as the batter was ruled not out. Though, there was a spike detected on the ultra edge when the ball passed the bat.

Kohli was thus once again left unhappy and had a chat with the on-field umpire before heading back towards the second slip. On his way, he had a small exchange with Van der Dussen and taunted him for going After 24-year-old Pant.

"Really? So you go after someone who is five years younger than you? Yeah? And then you are asking me if you sledge Rishabh?," Kohli can be heard telling the Proteas batter on the stump mic.

What will we do without Virat Kohli pic.twitter.com/vg7XPSdEQX

Asked to chase 212 runs in their second innings, South Africa got off to a shaky start as they lost opener Aiden Markram cheaply on 16 before captain Dean Elgar and Keegan Petersen added 78 runs for the second wicket. While Elgar could only score 30 off 96 balls, Petersen slammed a brilliant 82 to help South Africa scale down the 212-run target comfortably.

South Africa denied India a historic maiden Test series win in their own backyard with the seven-wicket victory. India were on the verge of scripting history in the series after they won the series-opener in Centurion. However, the hosts bounced back to win the next two games in a row to claim the series 2-1.