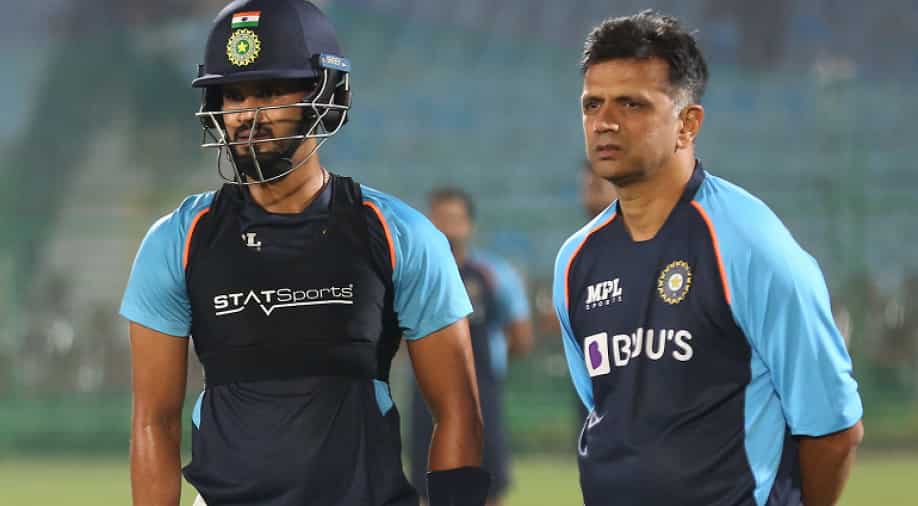 Shreyas Iyer revealed advice from Rahul Dravid before he went on to bat on Day 4 of 1st Test. | Photo - BCCI | Photograph:( Others )

Team India batter Shreyas Iyer revealed the advice from head coach Rahul Dravid before he went in to bat during the team's second innings on Day 4 of the first Test against New Zealand on Sunday.

Team India star Shreyas Iyer had a dream Test debut against New Zealand in the ongoing series-opener between the two sides at the Green Park Stadium in Kanpur. After a magnificent century in India's first innings, Iyer followed it up with a brilliant half-century in the second innings to become the first India batter to score a ton and a fifty on Test debut.

India's top-order suffered a terrible collapse in their second innings on Day 4 of the Test match on Sunday as the visitors were left reeling at 51/5 at one point. Iyer showed remarkable grit and batted well to bail the hosts out of trouble with his terrific knock.

He combined with R Ashwin (32) to post a 52-run stand for the sixth wicket before adding 64 runs for the seventh wicket with Wriddhiman Shaha, who also played an amazing knock of 61 runs.

Iyer revealed the advice he had recieved from head coach Rahu Dravid before going in to bat and also said it was not the first time that he found himself in such a pressure situation as he has played such knocks in domestic cricket as well.

"I had been in this situation before as well, not with the Indian team but with my Ranji team. Mindset was to play the session and play as many balls as possible. I wasn't thinking too far ahead, was just focusing on the present," Iyer told the official broadcaster at the end of the 4th day's play in Kanpur.

He revealed Dravi had asked him to stay out their in the middle for as long as possible and stay as long as he can. . "Rahul Sir had told me to bat as many balls as possible and I was determined to do that," said the right-hander, who scored 105 and 65 in the two innings of his debut Test match.

With the help of half-centuries from Iyer and Saha, India posted 234/7 on the board and stretched their lead to 283 runs before declaring. New Zealand lost opener Will Young (2) cheaply in their second innings as R Ashwin struck early for India toward the closure of Day 4. New Zealand now need 280 runs to win with nine wickets to spare and a day in hand.

Indian are in a strong position in the Test match and will be looking to bundle out the visitors quickly on the final day and seal the Test match.