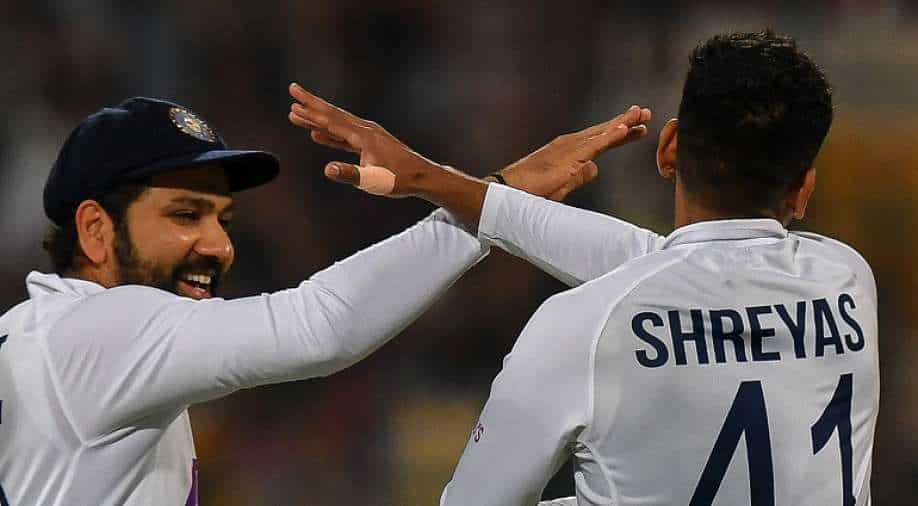 In challenging conditions to bat under the lights the Indian batters struggled but Shreyas Iyer's strategy to attack paid him rich dividends as he top-scored for India in both innings scoring 92 and 67.

Rohit Sharma went on to clean sweep his maiden Test series as a skipper as India beat Sri Lanka by 238 runs in the Day-Night Test match here at the M Chinnaswamy Stadium to sweep the two-match series 2-0.

In challenging conditions to bat under the lights the Indian batters struggled but Shreyas Iyer's strategy to attack paid him rich dividends as he top-scored for India in both innings scoring 92 and 67.

His superlative performance helped him earn the 'Player of the Match' award as well as the praise of his skipper.

"Shreyas just carried on from where he left off in the T20 series against Sri Lanka. He seemed to carry that form into the Test series. He knew he was stepping into the big shoes of guys like Rahane and Pujara, but he has everything that he requires. He will be better now when he starts travelling," said Indian captain Virat Kohli.

ALSO READ: Rishabh Pant will end up being one of the greats like MS Dhoni for Team India, says Dinesh Karthik

Ravindra Jadeja was India's star performer in the previous match in Mohali performing with both bat and ball.

"We have seen Jadeja grow as a batter and he seems to get better and better. He strengthens the team, and he's also improving as a bowler. And he`s a gun fielder, so he is a complete package," told Rohit Sharma.

Wicket-keeper batter Rishabh Pant played a knock of 39 of 26 balls in the first innings and scored the fastest Test half-century by an Indian in a Test match breaking Kapil Dev's record of achieving the same in 30 balls way back in 1982 against Pakistan in Karachi.

His all-around performance in the series helped him bag the 'Player of the Series' award.

"Rishabh seems to get better with each game that he plays. Especially in these conditions. We saw it in the England series (last year) and now. A couple of catches and stumpings showed how confident he is," said Rohit Sharma.

India were playing its third Test match on home soil and they have won all three inside three days.

"It's been a good run and I have enjoyed it personally and as a team. We wanted to achieve a few things as a team, and we have done that. Pink-ball Tests are challenging. We never knew what it was like to play with the pink ball in India, but we are learning to make those adjustments. The crowd just makes it more special," told Rohit Sharma.