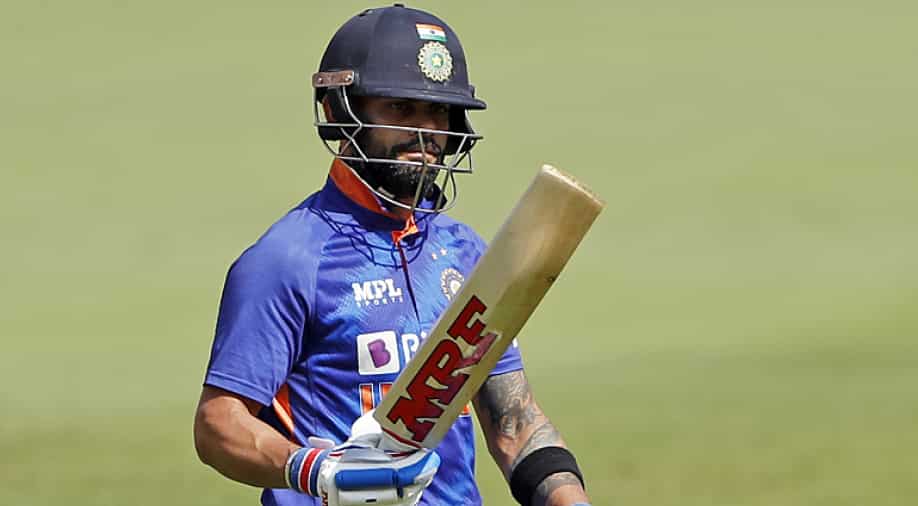 Should Virat Kohli be rested for a few matches amid his lean patch for India? Photograph:( ANI )

As Virat Kohli continues to struggle with the willow, many have suggested the former Indian skipper should be asked to rest and miss a few games for Team India.

After a forgetful tour of South Africa, Virat Kohli's struggles with the willow have continued in the ongoing ODI series between India and West Indies at home. Questions have been raised over Kohli's form with many suggesting the former India captain should be asked to rest for a few games in order to find his mojo back.

Kohli was dismissed for a 4-ball 8 in the first ODI before scoring 18 off 30 balls in the second game. Though India managed to win both the games comfortably, Kohli didn't enjoy great outings on the personal front. While he has failed to bring an end to his century drought since 2019, Kohli's form has been under the scanner in the ongoing series.

Many have suggested Kohli should be rested for a few matches as he doesn't look in the right space of mind ever since being sacked as the ODI captain of the side. However, former India cricketer Aakash Chopra believes the former India skipper should not be asked to rest unless he himself demands a break.

"There has been a lot of talks that Kohli should be asked to rest, that you are not having a great time, take a break now also and if you like, don't play the T20s as well. I will never keep that proposal in front of Virat Kohli. It is fine if he himself says that he wants to take a break," Chopra said in a video on his YouTube channel.

The cricketer-turned commentator further added that every batter goes through a lean patch in his career and a legend like Kohli doesn't have to prove his credentials again after enduring slight bad form.

"You are talking about Virat Kohli. It does not happen that a legend does not remain a legend because of slight bad form. When you go through bad form, we all have gone through that more compared to Kohli, you want to play regularly at times. You don't want a break," Chopra added.

Kohli's poor run with the bat continued in the third and final ODI between India and West Indies at the Narendra Modi Stadium in Ahmedabad on Friday as he was once again dismissed for a duck. Kohli was sent back without managing to open his account after edging one to Shai Hope off the bowling of Alzarri Joseph in the third ODI.