Shoaib Akhtar recalls meeting Hardik Pandya during Asia Cup 2018: 'I was shocked, warned him about injury' 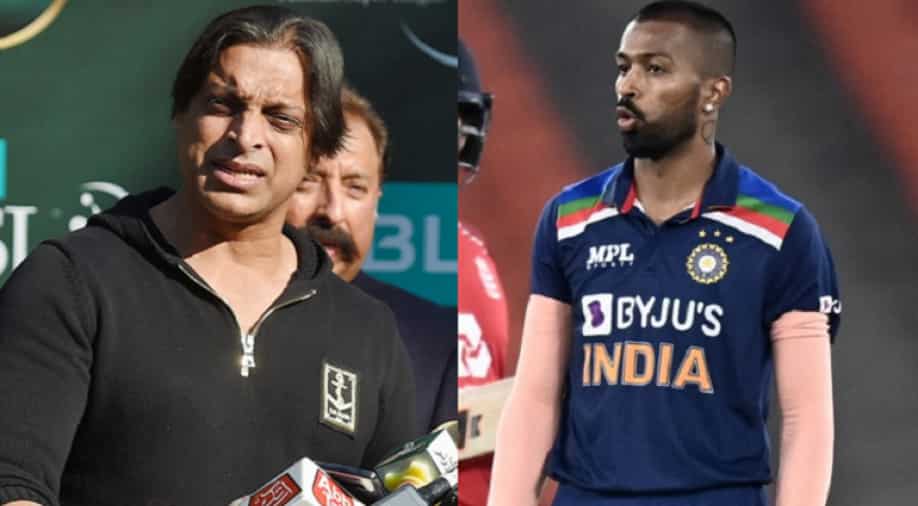 Shoaib Akhtar revealed he had warned Hardik Pandya about a back injury in 2018. Photograph:( AFP )

Former Pakistan pacer Shoaib Akhtar recently recalled his meeting with Hardik Pandya during the Asia Cup 2018 when he had warned the India all-rounder about his lean physique and chances of a possible back injury.

Former Pakistan fast bowler Shoaib Akhtar recently recalled his meeting with star Indian all-rounder Hardik Pandya during the Asia Cup in 2018. Akhtar said he was shocked by Hardik's very lean physique and had even warned him of an injury. Incidentally, Hardik was stretchered off the field just moments later due to a back injury in India's clash against Pakistan.

Hardik suffered a back injury while bowling during the game against Pakistan. He went down on the ground and lied motionless for a while after clutching his back. BCCI later confirmed that he had incurred 'an acute lower back injury'. The back injury has since continued to trouble the all-rounder, who has had to significantly reduce his workload due to the issue and has avoided bowling too much.

Akhtar revealed he was present in Dubai for the India-Pakistan clash in the Asia Cup 2018 and had met both Hardik and Indian pacer Jasprit Bumrah. Talking to former India cricketer Aakash Chopra on his YouTube channel, Akhtar recalled how he warned Hardik about an injury ahead of the game and the all-rounder ended up getting his back injured just moments later.

"I told Bumrah in Dubai, even Hardik Pandya...I still have such strong back muscles behind my shoulders, but they looked so lean. I was shocked. I warned him that you will get injured, but he told me that he has been playing a lot of cricket. Exactly an hour and a half later, he got injured," Akhtar said.

Hardik's back injury has seen him struggle consistently while bowling in the last few years. The all-rounder did not bowl at all for Mumbai Indians in IPL 2021 this year and has not been bowling regularly for India as well in both ODIs and T20Is.

Hardik was dropped from India's T20 squad post the T20 World Cup 2021 where he failed to impress with both the bat and the ball as the team endured a disappointing campaign. The all-rounder is currently training at the NCA in Bengaluru and will be hoping to make a strong comeback in the future.