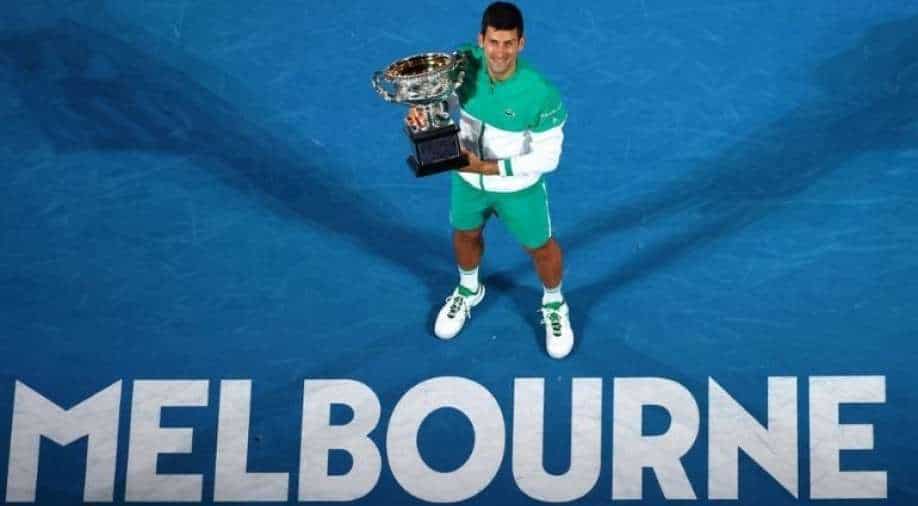 According to the Organisers, the defending champion was not given special treatment. Craig Tiley, head of the Australian Open, says Novak Djokovic received no special favours in getting a Covid vaccine exemption to play. Photograph:( WION Web Team )

The move sparked a furious backlash, despite the organiser's statements, Australians - some of whom are still unable to travel interstate or internationally - have criticised officials, politicians, and Djokovic himself

Tennis player Novak Djokovic was exempt from vaccination rules for the Australian Open, prompting an angry response from Australians.

Participants in the tournament, which starts on January 17, must either be vaccinated against COVID-19 or have a medical exemption, which is granted only after a medical evaluation by two independent expert panels.

According to the Organisers, the defending champion was not given special treatment. Craig Tiley, head of the Australian Open, says Novak Djokovic received "no special" favours in getting a Covid vaccine exemption to play.

The move sparked a furious backlash, despite the organiser's statements, Australians - some of whom are still unable to travel interstate or internationally - have criticised officials, politicians, and Djokovic himself.

Stephen Parnis, a former vice-president of the Australian Medical Association, said it sent an appalling message to those fighting COVID-19's spread.

I don't care how good a tennis player he is. If he's refusing to get vaccinated, he shouldn't be allowed in. If this exemption is true, it sends an appalling message to millions seeking to reduce #COVID19Aus risk to themselves & others. #Vaccination shows respect, Novak. pic.twitter.com/enwr03s5KO

Djokovic, the nine-time Australian Open champion, announced late Tuesday he was on his way to Melbourne with "exemption permission", ending the lengthy saga over whether he would defend his title. On Twitter netizens reacted strongly to the exemption:

And it’s the choice of Australians to not support him!

Love watching @DjokerNole play tennis, but his exemption is dangerous to the health and safety of all those in Melbourne. Shame on the @AustralianOpen for allowing this.

Hope the crowd will boo you out Novak. Hope you will be eliminated in the first round. Anti-vaxxers like you are not welcome here in Australia.

@joshgnosis I’m disappointed to know that @DjokerNole will be allowed into Australia for the #AustralianOpen this sends a harrowing message to everyone. Deplorable! @DjokerNole you need to grow up bro.

This man has said to Melbourne “F##k you Melbourne, I don’t care what you’re going through, or have been through. All I care about is me.” This man is a Covid-denier and anti-vaxxer. Melbourne should boo-t this guy out of town.

@DjokerNole playing in the @AustralianOpen is an international shame. This world in Wrong, sick, and helpless!

And now what the fuck was all that lockdown for? Why did we fight with friends and family about whether they were vaccinated if #novakdjokovic can do the fuck he likes? Next time I'm discussing vax status with someone I'll give them the option of identifying as #novakdjokovic

Others, however, were more sympathetic

@DjokerNole please don’t think Melbournians hate you when you arrive. It’s been years of shut down that have caused the angst. I can’t wait to see you play, and hope you do bother coming back after this…

He’s already had Covid-19. His immunity is as good or better than any currently offered vaccine, so everyone just get over yourselves. If the Australian government offered him an exception, be mad at them, not Novak. He didn’t put you in lockdowns. Hate the game, not the player

You stood your ground and did what millions of Victorians could not do. Good on you!

Good on you mate.. You show those new age Nazis in Australia that you will do whatever you want with your body. And that shouldn't stop you living your life. Love it.

The Serb has repeatedly refused to confirm if he has been inoculated and previously expressed opposition to the coronavirus vaccine.

Defending the integrity of the process that reviewed Djokovic's exemption application, Tiley said that it had been overseen by the national and Victorian governments.

Watch | WHO: Evidences suggest that the Omicron variant of COVID-19 is milder than previous variants

He revealed that there were 26 players or their support staff from the 3,000 or so going to Australia who requested an exemption, and only a few of them were granted one.