Sanjay Manjrekar explains why Rohit Sharma should have left captaincy before IPL 2022, names his replacement 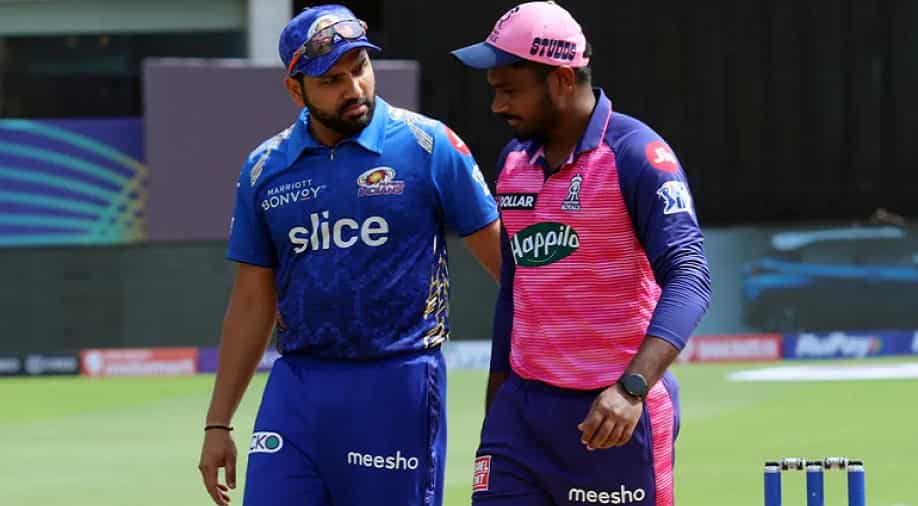 Should Rohit Sharma have given up captaincy at Mumbai Indians ahead of IPL 2022? | Photo - IPL | Photograph:( Others )

Former India cricketer Sanjay Manjrekar explained why Rohit Sharma should have left Mumbai Indians' captaincy ahead of IPL 2022 and played as a pure batter.

Former India cricketer Sanjay Manjrekar believes Rohit Sharma should have given up captaincy for Mumbai Indians (MI) ahead of the start of the Indian Premier League (IPL) 2022. Rohit, who is the most successful captain in the history of the Indian Premier League, has led Mumbai Indians to five titles over the years but his form with the bat has been concerning over the last couple of seasons.

Rohit hasn't managed to fire with the bat for the five-time champions in the last couple of seasons and his poor patch has continued in the ongoing IPL 2022. As the Hitman struggles to attain consistency for his team, Manjrekar explained why leaving captaincy could have helped him perform better as a batter.

Manjrekar named Pollard as Rohit's replacement as captain and said the West Indies all-rounder still brings a lot of value to the table for MI. Pollard has played for Mumbai Indians throughout his IPL career and was one of the players to be retained by the franchise ahead of IPL 2022.

Though he hasn't quite managed to set the stage on fire with his performances this season, Manjrekar believes he needs just one game to find his mojo. Manjrekar said Rohit should have stepped down from captaincy like Virat Kohli did with RCB and should have handed over the baton to Pollard.

“I feel Pollard still adds value. [Before the season] I even felt Rohit Sharma might leave captaincy like Virat Kohli, relax a bit, play as a pure batter and hand the responsibility to Pollard who is a brilliant international captain,” Manjrekar said on ESPNCricinfo.

“Pollard still has the capability, I can see that from the sixes he hits. He’ll contribute in the pressure match, the crunch game. But they need to reach there first and that’s not on Pollard, it never has been. He’s never contributed throughout the season for Mumbai Indians. He plays one innings in a pressure game and sees the team through. Others need to work better because Pollard is doing his usual job,” he added.

After replacing Kohli as India's T20I captain last year, Rohit also took over from the batting maestro as the new captain of the national team across all three formats this year. While Rohit has been enjoying a purple patch for the Indian team in international cricket, his form has been under the scanner for MI in the IPL.

Manjrekar believes the burden of captaincy at Mumbai Indians has forced the Hitman to play the anchor's role while curbing his natural instincts. The former India cricketer pointed out how Rohit plays freely for the national team and said if he plays freely, people will get to see a different Rohit at Mumbai Indians.

“His record has been like this for the last 3-4 seasons, average less than 30, strike-rate not 150 or 160. When he plays for India his numbers get better… because then he only thinks about himself and less about the team. When playing IPL, he tries to play the anchor role similar to what KL Rahul did with Punjab Kings and Hardik Pandya did in the last matc. If he plays freely, we’ll see the Rohit Sharma we see in Indian cricket,” Manjrekar added.

Mumbai Indians have had a disastrous start to their campaign in the ongoing IPL 2022 with four losses in their first four games and are yet to secure their first points this season.