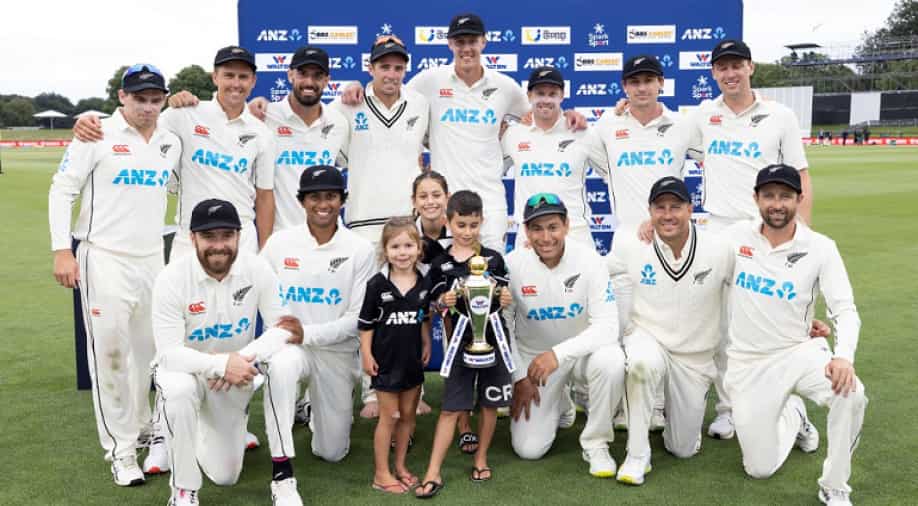 New Zealand defeated Bangladesh by an innings in the second Test. Photograph:( AFP )

Ross Taylor signed off from his last Test with a win as New Zealand defeated Bangladesh by an innings and 117 runs in the second Test.

A courageous century by wicketkeeper Liton Das made Bangladesh a hard nut to crack but New Zealand finally broke through on Tuesday to win the second cricket Test by an innings and 117 runs to tie the two-match series.
Das batted almost one-handed for much of his innings after being struck on the glove. He weathered a barrage of short-pitched bowling from New Zealand to post his second Test century from only 106 balls.

Bangladesh rallied around his resilient example to force a match that many thought would be over quickly on Tuesday into the final session of the third day before the last wicket fell 20 minutes from scheduled stumps.

Das finally was out for 102 and the end came swiftly afterwards with Bangladesh losing its last wickets in dimming light at Hagley Oval. When the ninth wicket fell the crowd began baying for the veteran batsman Ross Taylor who will retire from Test cricket after his 112th Test to be given a chance to bowl.

When the light became too poor for the quicks to continue, captain Tom Latham bowed to the crowd's demand and Taylor's third ball of gentle off breaks brought a false shot from Ebadot Hossain who skied the ball to Latham. That brought the curtain down on Taylor's 15-year Test career in the most unusual fashion and to the reverberating cheers of the crowd.

Taylor had bowled only 16 overs in all of his previous Tests for two wickets, the last time eight years ago. But fate conspired to bring his career to an extraordinary end. First mobbed by his teammates and presented the match ball, he walked from the field through a honour guard formed by Bangladesh, providing one last rich memory of an outstanding career.

"We needed to win this game to stay in the series and I thought we played fantastically well," Taylor said.

"Bangladesh put us under pressure at various times and that was probably a fair reflection of where the series was at.

"I wanted to finish with a win and the guys obviously gave that to me."

Also Read: Fairytale ending! Ross Taylor finishes in style with a wicket off last ball of his Test career - WATCH

It was significant that the final catch was taken by Latham as the New Zealand captain had an outsized influence on this match. He scored 252, his second Test double century, in New Zealand's first innings of 521-6 declared, then took six catches as New Zealand bowled out Bangladesh for 126 and 278 after enforcing the follow-on.

In doing so, Latham became the first player in Test history to score 250 and take six catches in the same match.

"We came here 1-0 down after losing the first test and putting a performance like this on the board was very pleasing," Latham said.

"We talked about it in the days before the match that we had to improve on a number of areas and I thought we did that well.

"I guess getting put in on day one on a wicket we know does a little bit on day one, to get through that first session, to build partnerships throughout the innings was ideal. I guess we know first innings scores here are very important."

The result appeared a reversal for Bangladesh who made history when they won the first Test by eight wickets for their first win in any format in New Zealand. The win by the world's ninth-ranked team over the World Test

Champion, especially in New Zealand conditions, was regarded as one of Test cricket's great upsets.

The tourists struggled to recover in the second Test after New Zealand's mammoth first-innings total but the fight they showed on the final day was impressive and they eventually will be pleased with a drawn series.

"I'm really happy with the first Test but the first innings of the second Test was disappointing," Bangladesh captain Monimul Haque said.

"I think it was very challenging for us after winning the first Test to keep our momentum for the second."