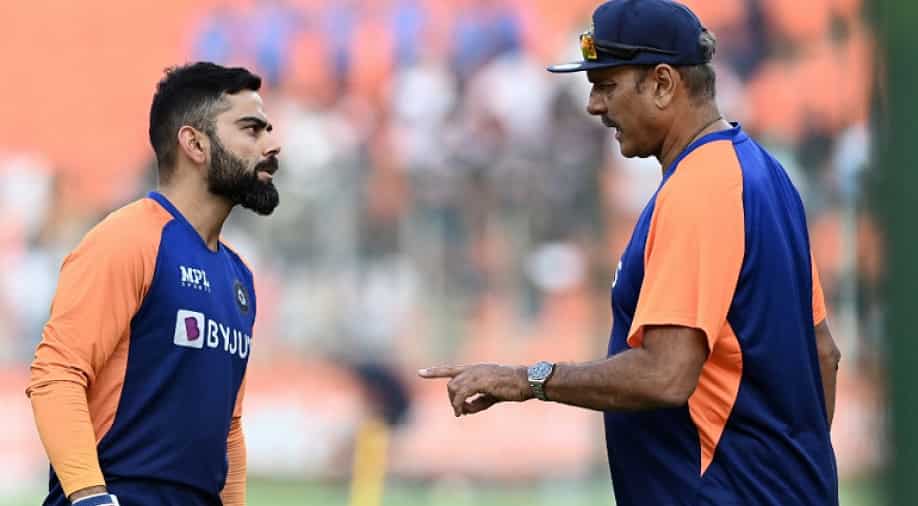 Inzmam-ul-Haq claimed the relations between Kohli, Shastri and BCCI were not good. Photograph:( AFP )

Former Pakistan captain Inzamam-ul-Haq has made yet another absurd claim regarding the Indian cricket team. Inzamam feels the relations between captain Virat Kohli, head coach Ravi Shastri and the BCCI were not that great which led to India's poor show in the T20 World Cup 2021.

Former Pakistan captain Inzamam-ul-Haq who recently claimed that the Indian players 'were scared' and 'under pressure' even before the start of their game against Pakistan in the T20 World Cup 2021, has made yet another absurd statement. Inzamam believes the relations between captain Virat Kohli, head coach Ravi Shastri and the BCCI were not good during the T20 World Cup which led to India's poor show in the tournament.

India suffered a crushing defeat in their opening game of the Super 12 against arch-rivals Pakistan before losing their next game against New Zealand by eight wickets. The back-to-bac defeats pushed India on the back foot and confirmed their early exit from the tournament as the Men in Blue could only manage three wins in a total of five matches.

India's T20 setup has undergone massive changes since the conclusion of the T20 World Cup 2021 as Shastri and Kohli have both stepped down from their respective posts of the head coach and captain. While Shastri has been replaced by Rahul Dravid as India's head coach across formats after the end of his contract, Kohli has been replaced by Rohit as the T20 captain of the team.

Inzamam said Kohli's announcement before the start of the tournament that he is leaving captaincy was not a good move. He also claimed that the relations were not good between Kohli, Shastri and the Indian cricket board as they knew Shastri was going to be replaced by Dravid after the tournament.

"I said this even before the match, that this statement of leaving captaincy after the tournament… it is not good. You have to play a big event and this shows that there is pressure on you and you are not comfortable. They all knew that after this tournament, Shastri was to get replaced by Dravid," Inzamam said on ARY News.

"This should not happen before a big event. Your authority gets challenged. And this means that relations between Kohli, Shastri and board were not great. If India were to win the T20 World Cup, would they have removed the captain and coach? There was some problem between them," he added.

Also Read: Indians were scared, under pressure even before the Pakistan match started: Inzamam-ul-Haq

India's campaign at the T20 World Cup got off to the worst possible start with their ten-wicket defeat against Pakistan before slipping to an eight-wicket loss against New Zealand. The back-to-back defeats meant India failed to recover and had to make an exit from the group stages.